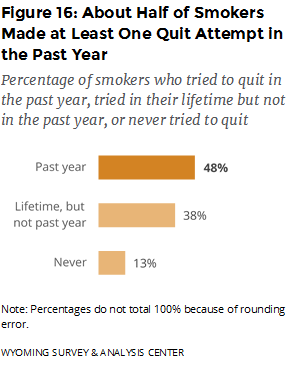 The Wyoming TPCP and the CDC share the goal of reducing the health burdens of tobacco use by promoting quitting among adults and young people. 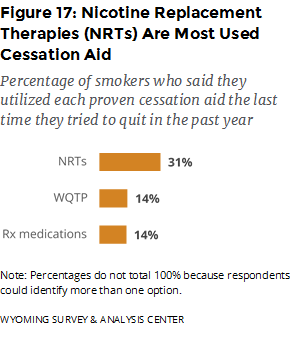 Relatively few smokers who had tried to quit in the past year had used proven cessation aids (Figure 17). When they did use proven cessation aids, nicotine replacement therapy (NRT) was the most often used, consistently since 2012, when comparable questions were first asked.

When they had tried to quit or wanted to quit, most smokers faced obstacles to quitting cigarette smoking. The most common barriers were loss of a way to handle stress and cravings for a cigarette, followed by other people smoking around them (Figure 18). Thus, smokefree indoor air policies and reducing exposure to secondhand smoke could help many smokers who are trying to quit. 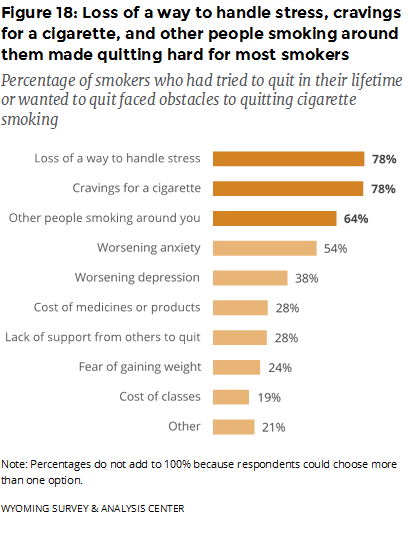 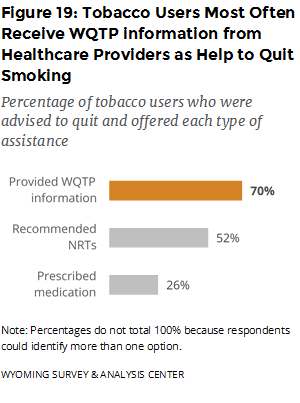 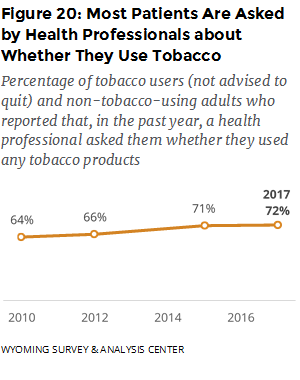 In a separate line of questioning, in the past year, 72% of tobacco users who were not advised to quit and non-tobacco-using adults reported that a health professional asked them whether they smoked cigarettes or used other forms of tobacco (Figure 20). This is a significant increase over time, going from 64% in 2010, when comparable questions were first asked, to 72% in 2017. Thus, healthcare professionals seem to be more frequently screening their patients for tobacco use. This increase coincides with changes related to the Patient Protection and Affordable Care Act of 2010, though we cannot make a causal attribution to the requirements of that law. Still, 13% of tobacco users were not advised to quit nor screened for tobacco use. 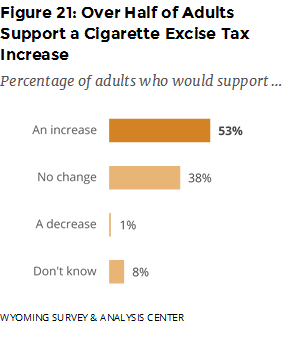 Increasing the price of tobacco products is one method of encouraging the cessation of tobacco use (CDC, 2015) and discouraging the initiation of tobacco use (CDC, 2014b). Since 2003, the state of Wyoming has taxed cigarettes with an excise tax of $0.60 per pack. When asked how much of an increase above $0.60 they would approve, over half (53%) of adults would approve an increase of some amount (Figure 21). The most popular amount was an increase of $1.50 or more, with 20% of adults supporting that change. For smokeless tobacco, over half (55%) of adults indicated that they were “for” an increase in the tax while 38% said they were “against,” and 7% said that they did not know or were not sure.

Appendix A includes data on price smokers paid for a pack or carton of cigarettes and use of special promotions to buy cigarettes.

The majority of smokers have tried to quit at some point in their lives and want to quit for good. However, the use of proven cessation aids is relatively low. When they had tried to quit or wanted to quit, most smokers faced obstacles such as loss of a way to handle stress, cravings for a cigarette, and other people smoking around them. Although it may be difficult for tobacco prevention efforts to help with the first two obstacles, reducing exposure to secondhand smoke could help many smokers who are trying to quit.