The Wyoming TPCP and the CDC share the goal of reducing the health burdens of tobacco use by eliminating nonsmokers’ exposure to secondhand smoke. 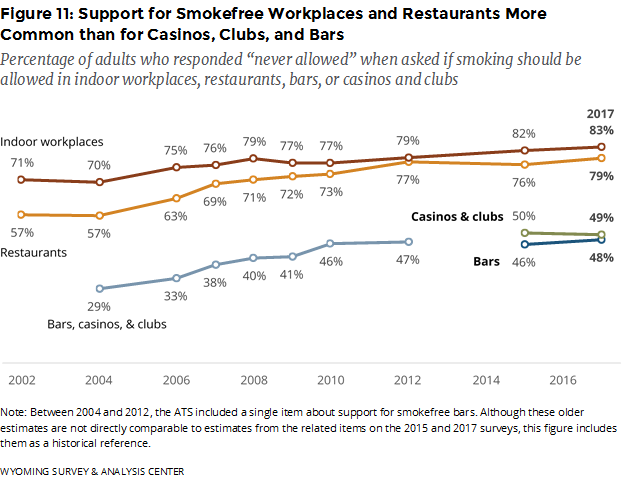 Results from the policy questions revealed that the percentage of Wyomingites who agreed that smoking indoors should never be allowed in workplaces or restaurants significantly increased from when comparable questions were first asked in 2002 to 2017. For bars and for casinos/clubs, support for smokefree policies remained relatively stable between 2015, when the comparable questions were first asked, and 2017, and remained lower than support for the other venues. The trend for related questions asked between 2004 and 2012 showed increasing support for smokefree indoor air in these venues (Figure 11). 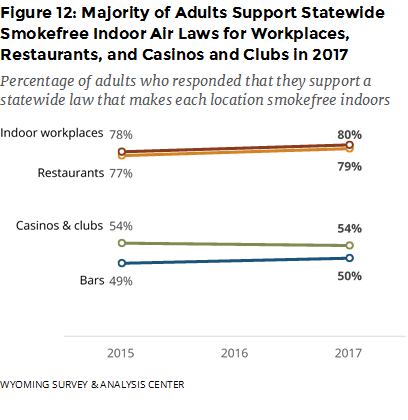 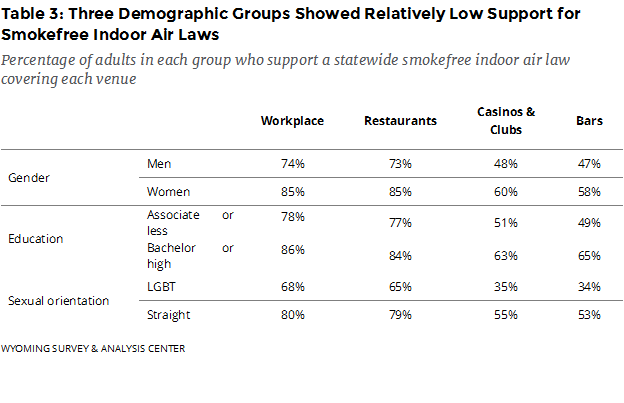 Support for Other Smokefree Air Policies and Laws

The percentage of adults who reported they do not allow smoking inside their homes has been high and has increased significantly from 72% in 2002, when the question was first asked, to 89% in 2017 (Figure 13). 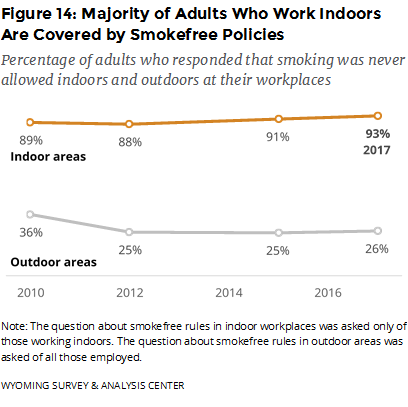 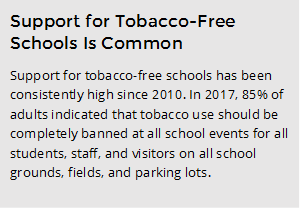 Consistently since 2010, most employed adults were not regularly exposed to secondhand smoke (SHS) at their workplace either indoors or outdoors. In 2017, 20% of working adults reported that they had breathed someone else’s smoke at their workplace in the past seven days. Adults who worked outdoors most of the time were more likely to be exposed to SHS than those who worked indoors (including in vehicles): 28% of adults who work primarily outdoors experienced SHS exposure, compared to 16% of those who work primarily indoors. 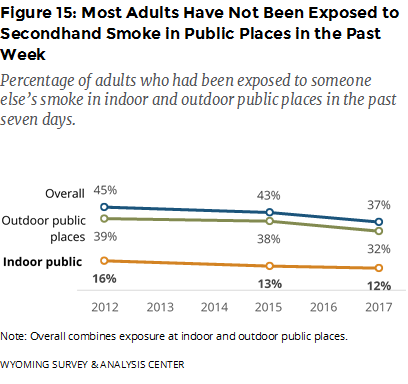 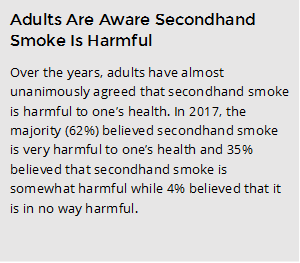 Adults almost unanimously agree that SHS is harmful to one’s health. However, opinions vary as to where and how smoking should be restricted. Adults have a high degree of support for the idea that indoor areas of restaurants and workplaces across the state should have smokefree indoor air. Similarly, support for smokefree indoor air laws covering those venues is common. Also, support for tobacco-free schools is high. There is less support for the idea that casinos, clubs, bars, and outdoor work areas should be smokefree or that there should be a law making them smokefree. As a reference point from a different survey in 2014, 71% of registered voters in Wyoming said they would support a smokefree indoor air law making all public buildings, such as government offices, stores, bars, and restaurants, smokefree indoors (WYSAC, 2015). Because that question was very different from the questions for the 2017 ATS, the difference in the estimates does not necessarily show a trend in support for smokefree air.

Most adults report working in places that have smokefree indoor air policies, but outdoor smokefree air policies at workplaces are relatively rare. Exposure to secondhand smoke is more likely to occur in outdoor areas, including at work and public places, than at indoor areas.