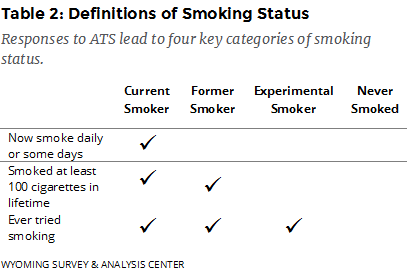 The Wyoming TPCP and the CDC share the goal of reducing the health burdens of tobacco use by preventing the initiation of tobacco use. A relatively recent effort in some local and state tobacco prevention programs outside of Wyoming has been to raise the legal age of purchase from 18 (or 19 in some jurisdictions) to 21 (see https://tobacco21.org/). We deviated from previous analytical approaches to provide data relevant to this emerging issue in tobacco prevention. 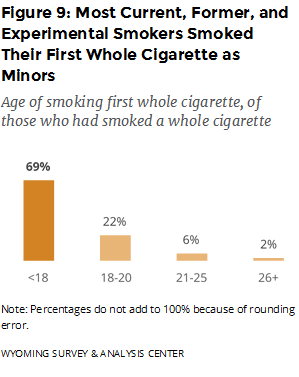 Age of Smoking a Whole Cigarette for the First Time 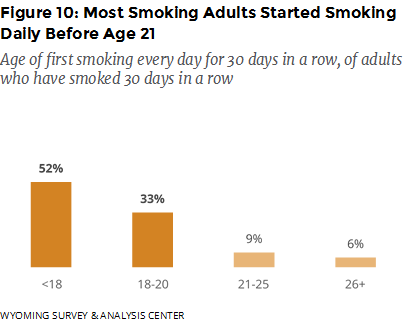 Among adults who had ever smoked at least one cigarette per day for at least 30 consecutive days (including current and former smokers), 85% said they started smoking daily when younger than 21 (Figure 10). This pattern has been stable since comparable questions were first asked in 2010.

Role of ENDS in Initiation of Cigarette Smoking

The 2017 ATS asked current, former, and experimental smokers (see Table 2 for a summary of the four smoking status categories) who had also tried ENDS whether they had used cigarettes or ENDS first. For most of these smokers (72%), this question was not applicable because ENDS were not on the market (to their knowledge) when they started smoking. For those smokers who thought ENDS were on the market, 54% used ENDS first and 45% tried cigarettes first. These proportions are not significantly different. 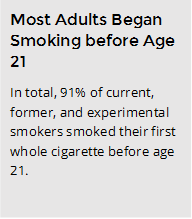 The smoking habits of the vast majority of smoking adults begin when they are under the age of 21, especially under the age of 18. Relatively few adults begin to smoke or begin to smoke daily after age 21. Although we cannot make causal inferences from these correlational data, the 2017 ATS provides some evidence in support of ENDS use as a potential gateway to smoking: 54% of current, former, and experimental smokers (see Table 2 for a summary of the four smoking status categories) who thought ENDS were available when they started smoking used ENDS before smoking a cigarette.