The Wyoming TPCP and the CDC track the prevalence rates and consumption of tobacco products as key indicators across their four shared goals. 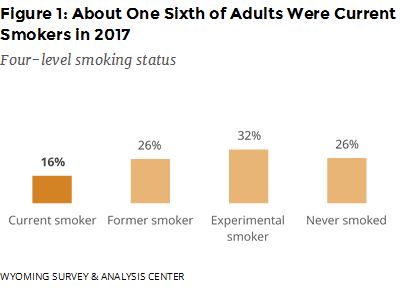 Responses to the ATS lead to four key categories of smoking status, described in Table 1. In 2017, about one sixth (16%) of adults were current smokers. About one quarter (26%) were former smokers. About one third (32%) were experimental smokers (Figure 1).

The adult smoking rate (current smokers) has shown a significant decrease since peaking in 2006 (Figure 2). 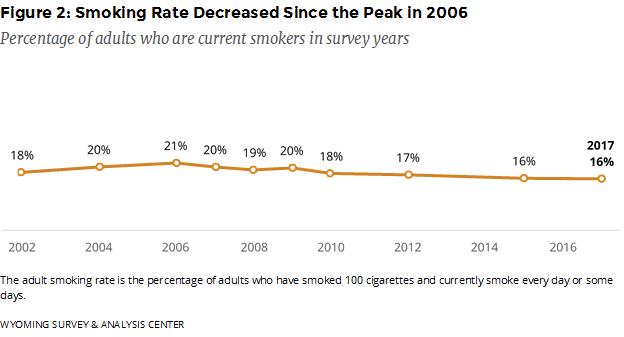 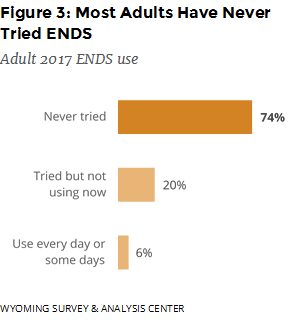 Although ENDS use is less popular than smoking cigarettes or using some other tobacco products, their relatively recent emergence on the market makes them a key tobacco prevention issue. About one in 20 adults (6%) currently use ENDS (e-cigarettes and vape pens) some days or every day (Figure 3). About three fourths (74%) have never tried ENDS. These estimates are similar to those from 2015, but may not reflect the increased popularity of ENDS that resulted from the recent commercial success of Juul’s new generation of ENDS products (LaVito, 2018). In addition, young adults (ages 18 to 29) are more likely to use ENDS than other adults (ages 30 or older): 11% of young adults currently use ENDS every day or some days, compared to 5% of other adults.

Of those current ENDS users, 86% used ENDS flavored to taste like menthol, alcohol, candy, fruit, chocolate, or other sweets. A customized commercial juice or liquid from a vape shop was the most popular ENDS brand (83%). Juul was not specified as a brand because it was not a major market force at the time of drafting the 2017 ATS questionnaire.

The most popular reason to try ENDS was curiosity (Figure 4). After that, the top results show an inclination by ENDS users toward cutting down or quitting cigarette smoking. These results are not significantly different from when the questions were first asked in 2015. 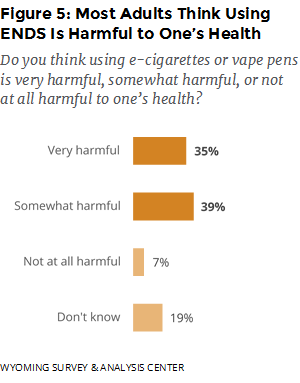 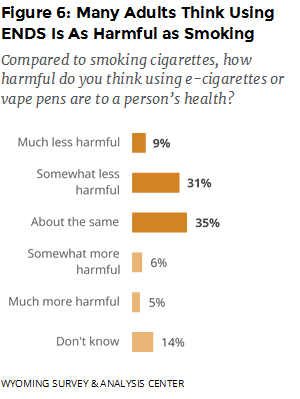 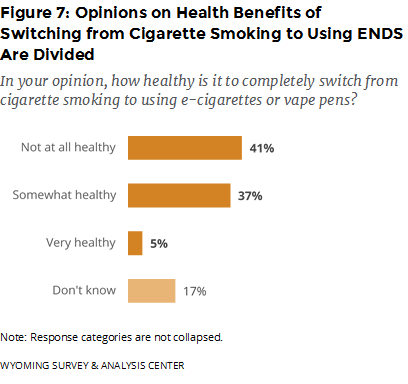 Among adults, non-cigarette, non-ENDS tobacco products are less popular than cigarettes. Relatively few adults reported using other tobacco products (Figure 8). Prevalence rates of these tobacco products have not significantly changed since comparable question were first asked in 2010. Also, few women use chewing tobacco, compared to men: 18% of men used it in the past 30 days compared to 1% of women. 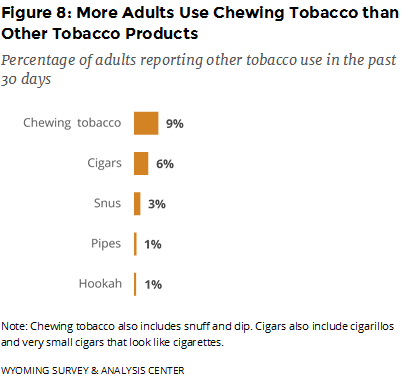 Among adults who had smoked at least 100 cigarettes and had also used chewing tobacco, snuff, dip, or snus in their lifetime, 37% of them had used some form of smokeless tobacco as a substitute for smoking when they were in a place where smoking was not allowed. This substitution rate has not significantly changed since 2012.

About half (49%) of adults who smoked cigars (including cigarillos and very small cigars) in the past 30 days smoked cigars flavored to taste like candy, fruit, chocolate, or other sweets. Young adults (ages 18 to 29) were significantly more likely to smoke flavored cigars than other adults: 70% of young adults smoked menthol cigarettes while 30% of other adults did so.

About half (52%) of adults who had ever tried ENDS in their lifetime used ENDS for reasons related to flavor: (1) for the flavoring or (2) because they thought ENDS tasted better. Young adults (ages 18 to 29) were significantly more likely to list these flavor-related reasons than other adults: 70% of young adults listed the flavor-related reasons for trying ENDS, compared to 42% of other adults. Also, flavored ENDS use is common among current ENDS users: 86% of current ENDS users used ENDS that taste like menthol, alcohol, candy, fruit, chocolate, or other sweets in the past 30 days.

Cigarettes are still the most popular form of tobacco for adults. ENDS use is not as prevalent as cigarette smoking or smokeless tobacco use in the overall adult population. Young adults (ages 18 to 29) are more likely to use ENDS than other adults (30 or older). The majority of current ENDS users used ENDS flavored to taste like something other than tobacco. Two of the top three reasons for using ENDS are cutting back or quitting cigarettes. While most adults would agree that ENDS use is harmful, many are unsure about whether ENDS use is harmful to one’s health and whether ENDS use or cigarette smoking has greater health risk. The prevalence rates of other tobacco products such as chewing tobacco, cigars, pipes, and hookahs remain relatively low, compared to cigarette smoking. Flavoring in cigarettes, cigars, and ENDS might be an important part of using those tobacco products, especially for young adults.