The Wyoming Adult Tobacco Survey (ATS) is a key component in the evaluation of Wyoming’s Tobacco Prevention and Control Program (TPCP). Under contract to the Wyoming Department of Health (WDH), the Wyoming Survey & Analysis Center (WYSAC) at the University of Wyoming called adults across the state (via cell phone and landline) to ask about their use of and attitudes about tobacco products and policies. Calling for the 2017 ATS began on April 30th, 2017, and ended on December 20th, 2017. The sample of 4,647 provides estimates for many of the state’s key evaluation questions and outcome performance measures that are part of the Centers for Disease Control and Prevention (CDC)-approved programming.

Because tobacco prevention outcomes result from state government programs including the one implemented in Wyoming, the efforts of multiple federal agencies—most prominently, the U.S. Food and Drug Administration [FDA], Substance Abuse and Mental Health Services Administration [SAMHSA], CDC, and other groups (e.g., the Robert Wood Johnson Foundation, Campaign for Tobacco-Free Kids, American Nonsmokers’ Rights Foundation, American Cancer Society, and American Lung Association)—changes over time reflect the cumulative impact of many sustained and new efforts to affect the key indicators. These indicators have not been revised drastically since at least 2005 (see CDC, 2007, 2014a, 2014b, 2015, 2017; Starr et al., 2005). 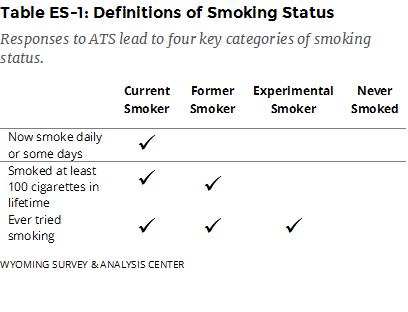 Is the WY TPCP impacting tobacco use rates? 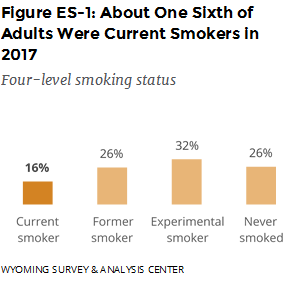 Responses to the ATS lead to four key categories of smoking status, described in Table ES-1. In 2017, about one sixth (16%) of Wyoming adults were current smokers. About one quarter (26%) were former smokers. About one third (32%) were experimental smokers (Figure ES-1).

The adult smoking rate (current smokers) has shown a 24% decrease since the peak in 2006 (Figure ES-2). It is likely that the evidence-based programming (e.g., media campaigns, providing the Wyoming Quit Tobacco Program) implemented by the WDH and community partners contributed to this decrease.

Is the WY TPCP having an effect on preventing Wyomingites from initiating tobacco use? 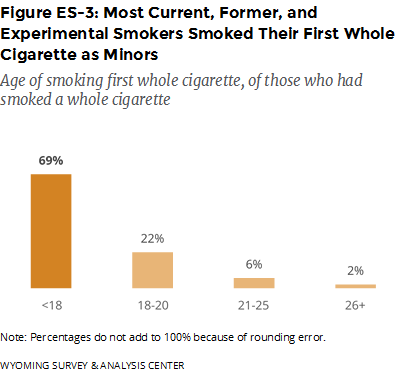 Among adults who had ever smoked at least one cigarette per day for at least 30 consecutive days (including current and former smokers), 85% said they started smoking daily when younger than 21. This pattern has been stable since 2010.

The evidence-based programming (e.g., restricting youth access to tobacco products, media campaigns) implemented by the WDH and community partners has likely contributed to these favorable trends even though those efforts cannot completely prevent underage tobacco use.

Are local, business, school, and other tobacco prevention and control policies changing?

The ATS does not directly assess the policies of businesses, schools, and other places related to tobacco. An indirect measure from the ATS for business policies is the proportion of working adults who reported smokefree indoor air policies at their workplaces. Most Wyoming adults (93%) who worked indoors reported that smoking was never allowed in indoor areas (including inside a vehicle) at their place of work. This is a relatively small but significant increase from 89% in 2010. It is likely that the evidence-based programming (e.g., educational efforts) implemented by the WDH and community partners contributed to this increase.

Are WY TPCP’s media and other educational efforts increasing public and decision-maker knowledge about tobacco prevention and control issues?

According to the CDC (2017), awareness of the harms of SHS is likely to increase support for smokefree air. Support for tobacco-free schools has been consistently high since 2010. In 2017, 85% of Wyoming adults indicated that tobacco use should be completely banned for all students, staff, and visitors on all school grounds, fields, and parking lots and at all school events. Results from questions asking about whether specific venues should have smokefree indoor air revealed that the percentage of Wyomingites who agreed that smoking indoors should never be allowed in workplaces or restaurants significantly increased from 2002 to 2017. For bars, casinos, and clubs, support for smokefree policies remained relatively stable between 2015 and 2017 and remained lower than for other venues (Figure ES-4). 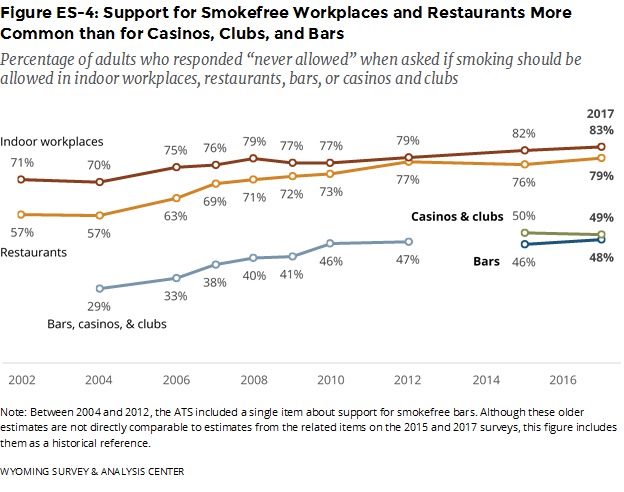 It is likely that the evidence-based programming (e.g., educational efforts) implemented by the WDH and community partners contributed to these favorable results and trends.

How are Wyoming’s social norms changing regarding tobacco use?

Increasing support for smokefree indoor air in restaurants, workplaces, and other venues (Figure ES-4) indicates strengthening anti-tobacco and pro-health social norms regarding tobacco use. Additionally, the percentage of Wyoming adults who reported they do not allow smoking inside their homes has been high and has increased significantly from 72% in 2002 to 89% in 2017.

In 2017, the average age at which adults who have ever smoked a whole cigarette smoked their first whole cigarette was 16 (with the median of 16 and the responses ranging from 4 to 58).

Proportion of young people who report never having tried a cigarette

Proportion of the population reporting exposure to SHS at the workplace

Consistently since 2010, most employed adults were not regularly exposed to SHS at their workplace either indoors or outdoors. In 2017, 20% reported that they had breathed someone else’s smoke at their workplace in the past seven days. Adults who worked outdoors most of the time were more likely to be exposed to SHS than those who worked indoors (including in vehicles): 28% of adults who work primarily outdoors experienced SHS exposure, compared to 16% of those who work primarily indoors.

Proportion of adult smokers who have made a quit attempt 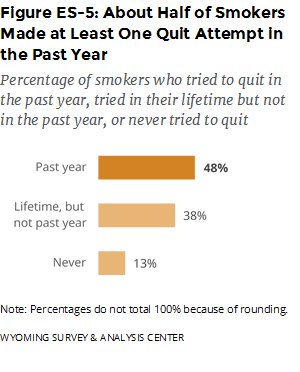 At some point in their lives, most current smokers (87%) had stopped smoking for at least one day because they were trying to quit for good. About half of current smokers (48%) had tried to quit smoking at least once in the past year (Figure ES-5), which has not changed significantly since 2010.

Proportion of young smokers who have made a quit attempt