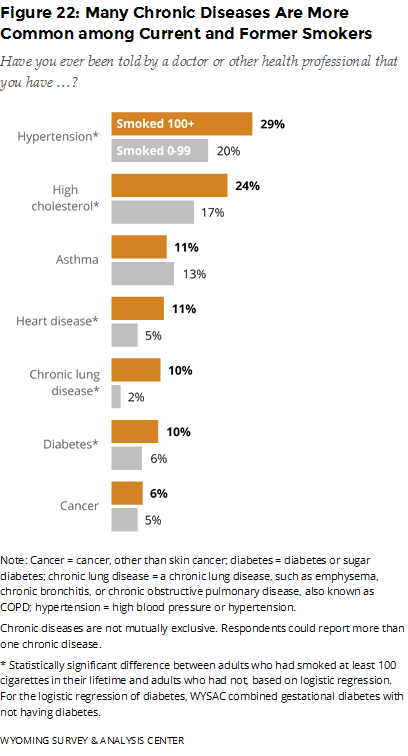 The TPCP collects data about the prevalence of several chronic diseases to understand the burden and consequences of tobacco use.

The U.S. Surgeon General has concluded that smoking is harmful to nearly every organ in the body, causes disease, and worsens existing illnesses (USDHHS, 2014). WYSAC created a logistic regression model based on data from the 2015 Wyoming ATS. The model found that hypertension, high cholesterol, heart disease, chronic lung disease, and diabetes were significantly more common among people who had smoked at least 100 cigarettes (current and former smokers) compared to those who had not (Figure 22; see Appendix C for detailed results).

Wyoming smokers are more prone to chronic illness and tend to feel less healthy overall. Reducing the prevalence of smoking will, over time, reduce the burden of chronic disease in Wyoming and help Wyomingites feel healthier.