Tobacco use is the leading preventable cause of premature death in the United States (U.S. Department of Health and Human Services [USDHHS], 2014). Nearly one of every five deaths in the United States is smoking related (USDHHS, 2004). Between 2005 and 2009, an average of 800 Wyoming residents died each year from tobacco use. This estimate does not include deaths attributable to secondhand smoke or smoking-attributable residential fires (Centers for Disease Control and Prevention [CDC], 2014a).

The Wyoming Tobacco Prevention and Control Program (TPCP) shares four goals with the federal tobacco prevention and control program: (a) reduce tobacco initiation (CDC, 2014b), (b) increase tobacco cessation attempts and successes (CDC, 2015a), (c) decrease exposure to secondhand smoke (CDC, 2017), and (d) eliminate tobacco-related disparities (CDC, 2014b; 2015a; 2017). Identifying those at risk for starting to smoke, use smokeless tobacco, or use electronic nicotine delivery systems (ENDS), augmenting efforts to reduce initiation of tobacco use, and increasing cessation efforts could help the Wyoming TPCP reduce smoking, smokeless tobacco use, and ENDS use. Ultimately, such changes would improve health and lower healthcare costs for many Wyoming residents. 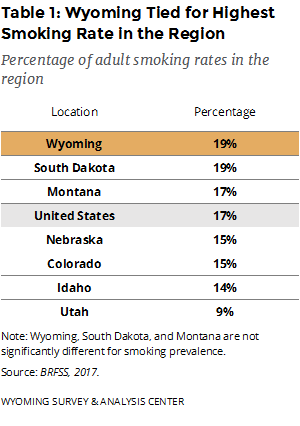 Current smokers are those who reported smoking at least 100 cigarettes in their lifetime and currently smoke every day or some days. According to the 2017 Behavioral Risk Factor Surveillance System (BRFSS), 19% of Wyoming adults smoke, a decline from 23% in 2011. For comparison, the national estimates (the median of the 50 states, the District of Columbia, and all U.S. territories). were 17% in 2017 and 21% in 2011. Wyoming, South Dakota, and Montana are in a statistical tie for the highest smoking rate in the region (Table 1). 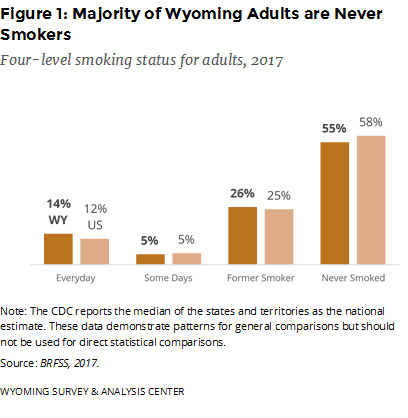 The adult population can be described in four groups based on smoking status: everyday, some-day, former, and never (Figure 1). Based on the 2017 BRFSS data for Wyoming, most Wyoming adults have never smoked (said they had not smoked at least 100 cigarettes in their lifetime). About half of the Wyoming adults who have been smokers are now former smokers. Among smokers, everyday smokers outnumber someday smokers. About four times as many Wyoming adults are current nonsmokers as are current smokers. 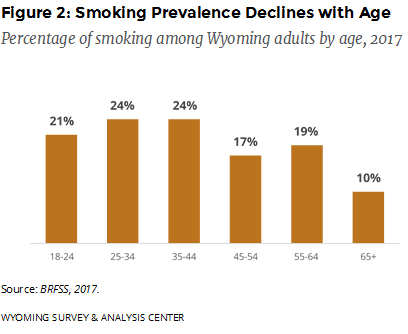 Smoking prevalence is lower among older adults than younger adults (Figure 2). In Wyoming, the percentage of those 65 and older who smoke is the lowest of all age groups (BRFSS, 2017). 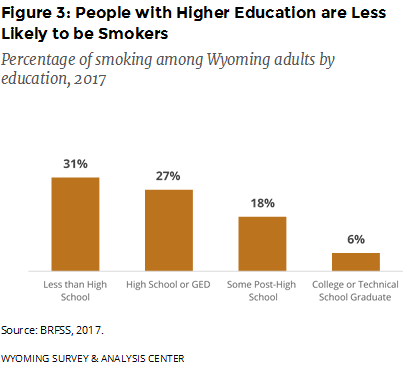 For Wyoming, people with more education are less likely to be smokers (Figure 3). The percentage of those with a college or technical degree who smoke is the lowest of all education groups (BRFSS, 2017). 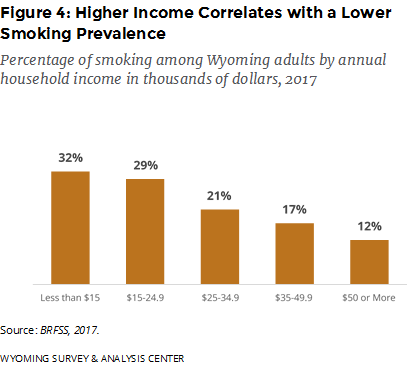 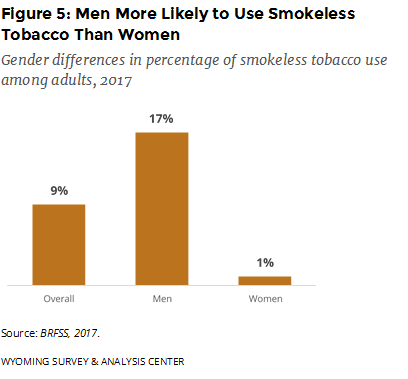 In 2017, 9% of Wyoming adults reported using chewing tobacco, snuff, or snus every day or some days, compared to 4% of U.S. adults. Wyoming’s rate of adult smokeless tobacco use was the highest in the nation. The rates in 2017 and 2013 (the oldest available year) were the same. In Wyoming, adult men (17%) are much more likely than adult women (1%) to use smokeless tobacco. Wyoming’s percentage of men who use smokeless tobacco is second highest in the nation (slightly behind West Virginia with a rate that also rounds to 17%), and compares to a national median of 7%. For Wyoming men, the slight difference between the 2017 rate and the 2013 rate (16%, the oldest available year) was not significant (Figure 5; BRFSS, 2017). CDC did not report a gender breakdown for national data.

CDC (2014c) reported that, nationally, use of smokeless tobacco in 2010 was higher among workers in the mining industry (19%) than in any other industry. Mining is Wyoming’s top industry (Wyoming Business Council, n.d.).

Electronic nicotine delivery systems (ENDS; also known as e-cigarettes, e-cigs, vape-pens, etc.) are battery powered devices that produce an aerosol by heating a liquid instead of producing smoke from burning tobacco. Contents of the liquid vary across products, and some models allow for customized liquids. Many ENDS liquids contain nicotine.

Infertility in women and complications during pregnancy are attributable to smoking. In addition, smoking during pregnancy is a risk factor of birth defects, disease, and mortality–including Sudden Infant Death Syndrome (SIDS) – among babies (CDC, 2015b).

Tobacco use is a preventable cause of chronic diseases like heart disease, cancers, respiratory diseases, and high blood pressure in the United States (USDHHS, 2014). Chronic diseases are leading causes of death and sickness in the United States and Wyoming. In 2016, cardiovascular disease, cancer, and chronic lower respiratory diseases were the first, second, and fourth leading causes of death in Wyoming, respectively (CDC, National Center for Health Statistics, 2017). 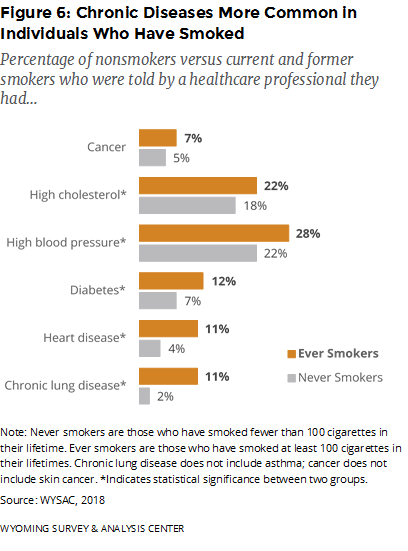