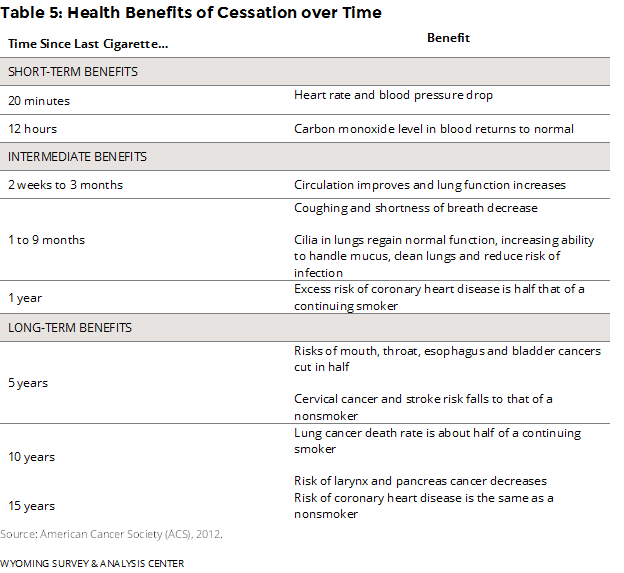 In 2012, 86% of current smokers had made a quit attempt during their lifetime; 55% of those smokers had tried to quit within the previous year ( 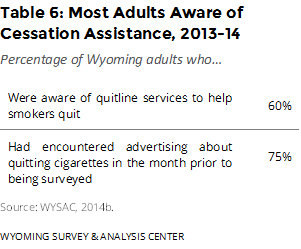 WYSAC, 2014a). Among current smokers who tried to quit in the previous year, 62% did not use the Wyoming Quit Tobacco Program (WQTP) or proven medications (nicotine replacement therapy [NRT] or prescription medications such as Chantix) during their most recent quit attempt. The most popular cessation aid was NRT: 28% of current smokers who had made a quit attempt within the previous year used NRT (WYSAC, 2014a). Most Wyoming adults said they were aware of cessation quitlines and advertisements for cessation services (Table 6; WYSAC, 2014b). 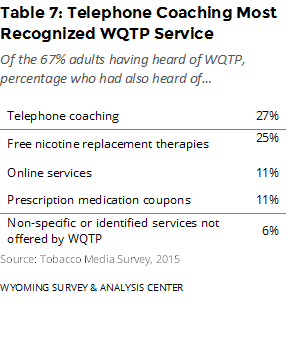 The Wyoming Quit Tobacco Program (WQTP) assists Wyoming residents who want to quit using tobacco by providing them with over-the-counter NRTs, coupons for prescription medication, and by offering them free cessation coaching services over the phone or online. WYSAC conducts a follow-up survey of WQTP enrollees seven months after their enrollment. The data in this section include information on WQTP participants who enrolled between July 2013 and April 2015. During this period, National Jewish Health provided WQTP services. WYSAC surveyed those participants seven months after they enrolled in the WQTP. Therefore, this section contains results from follow-up surveys conducted between February 2014 and December 2014 (WYSAC, 2014f).

In 2015, 67% of Wyoming adults reported having heard of the “Wyoming Quit Tobacco Program or WQTP.” The most well-known WQTP services were telephone coaching and NRTs (Table 7; Tobacco Media Evaluation, 2015). 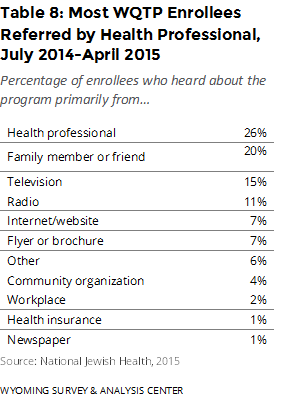 Use of WQTP Program Components 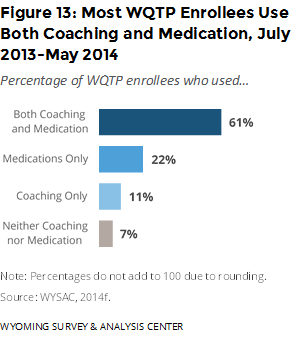 Seven months after enrollment, 30% of WQTP survey respondents had not used tobacco in the past 30 days. Quit rates varied by the program components enrollees used (WYSAC, 2014f):