Initiation as Reported by Adult Smokers 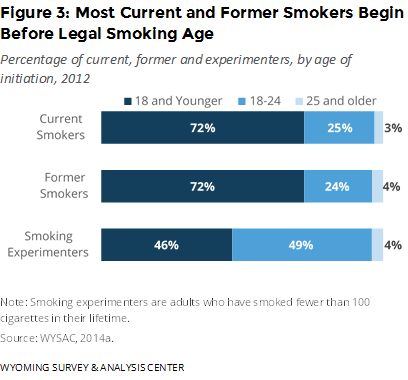 Overall, it is clear that most Wyoming adults who are or have been smokers began smoking before the legal age of 18. Few reported starting smoking after the age of 24 (Figure 3). Among current smokers, the age of smoking initiation appears to be increasing. Between 2010 and 2012, the percentage of current smokers who reported first smoking a whole cigarette before turning 18 decreased by 14 percentage points. In the same timeframe, the percentage of smokers who reported first smoking a cigarette between the ages of 18 and 24 increased by 13 percentage points. Among former smokers, the changes between 2010 and 2012 were relatively small and not statistically significant (WYSAC, 2014a).

Smoking experimenters are those who have smoked fewer than 100 cigarettes in their lifetime. Like current and former smokers, few experimental smokers first smoked a whole cigarette after the age of 24. However, similar percentages of experimental smokers first smoked a cigarette before the legal age of 18 and between the ages of 18 and 24. As with former smokers, changes in initiation age between 2010 and 2012 were relatively small and not statistically significant (WYSAC, 2014a). 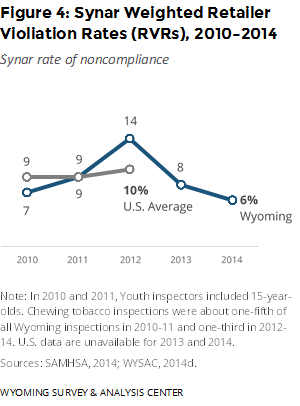 During Wyoming’s Synar inspections, trained 16- and 17-year old inspectors use standardized protocols to attempt to purchase cigarettes or smokeless tobacco from a sample of Wyoming tobacco retailers accessible to minors. Violations during Synar inspections do not result in actual sales, so citations are not issued. 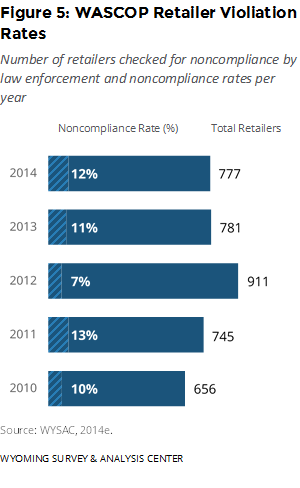 Wyoming’s Synar results are usually similar to the national violation rates (Figure 4). In 2012, Wyoming’s Synar noncompliance rate was unusually high at 14% because one geographic area had a high violation rate. Since 2007, clerks not asking inspectors for identification has been the strongest predictor of retailer violations in Synar inspections (WYSAC, 2014d).

Each year, the Wyoming Association of Sheriffs and Chiefs of Police (WASCOP) conducts additional inspections of tobacco retailers. During WASCOP inspections, trained adolescent inspectors attempt to purchase cigarettes from Wyoming tobacco retailers. Unlike Synar inspections, these compliance checks allow law enforcement officers to issue citations to merchants who sell to minors. WASCOP partners with WYSAC to compile and analyze the results of these inspections. Violation rates are generally slightly higher for WASCOP inspections (Figure 5) than Synar inspections. 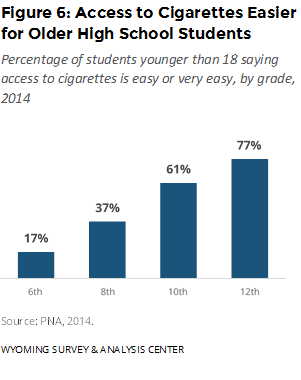 In 2014, 27% of Wyoming middle school students and 65% of Wyoming high school students under the age of 18 said it would be easy (either sort of easy or very easy) to get some cigarettes. The perceived ease of access to cigarettes varied by students’ grade level: Students in higher grades perceived access to cigarettes as easier than students in lower grades (Figure 6; PNA, 2014). In general, Synar compliance checks in Wyoming have shown that clerks are more likely to attempt to sell tobacco to older minors (WYSAC, 2014d). Together, these findings suggest that it may be easier for youth to purchase or otherwise access cigarettes as they approach the age of 18. 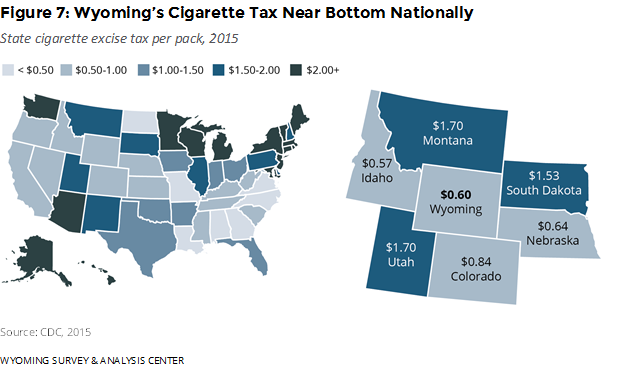 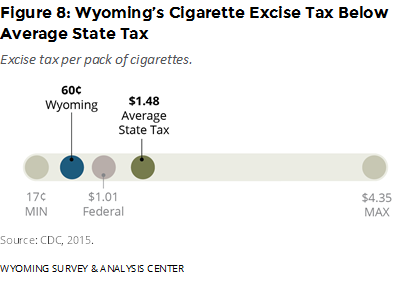 The average state tax rate is $1.48 (not including the federal tax). Wyoming is tied with Kentucky for the 11th lowest excise tax in the nation (Figure 8; CDC, 2015).

Consistent with every state that has implemented a significant cigarette tax increase (Farrelly et al., 2013), Wyoming experienced a significant increase in tax revenue when it last raised its cigarette excise tax. In fiscal year 2003, before the tax increase took effect, excise tax revenue from cigarette sales equaled $5.1 million (equivalent to $6.6 million today, adjusting for inflation). For fiscal year 2014, excise tax revenue from cigarette sales was $19.1 million (Wyoming Department of Revenue [WYDOR], ca. 2014). WYSAC generated a statistical model based on data from 1996 through 2014 that predicts that Wyoming would see $48.3 million in total revenue during the first year after a $1 tax increase (WYSAC, 2014c).