One of the four key goals the Wyoming Tobacco Prevention and Control Program (TPCP) shares with the federal tobacco prevention and control program is to increase tobacco quit attempts and successes (Centers for Disease Control and Prevention [CDC], 2015). Reductions in tobacco consumption resulting from utilization of tobacco cessation services will result in a decline in tobacco-related sickness and death.

The earlier in life tobacco users quit, the greater health and financial benefits they will experience (CDC, 2015). The percentage of Wyoming high school smokers trying to quit has been declining since 2001, as has the percentage of U.S. high school smokers trying to quit (Youth Risk Behavior Surveillance System [YRBSS], 2015).

The Wyoming Department of Health sponsors the Wyoming Quit Tobacco Program (WQTP) to help Wyoming tobacco users quit. Since first offering services in 2013, National Jewish Health has helped 30% of enrollees quit (WYSAC, 2018b). Most WQTP enrollees say the primary way they learn about the WQTP is through a healthcare professional, suggesting that WQTP enrollment could be increased through additional collaboration with healthcare professionals. WQTP participants who use coaching and medication are the most likely to be successful in quitting.

Tobacco Use in Wyoming

Tobacco use is relatively common among Wyoming youth and adults. Wyoming high school students tied for the third highest in the United States for smoking prevalence in 2015, with no statistically significant gender difference (YRBSS, 2015). The percentages of Wyoming and U.S. high school students who smoke declined between 1995 and 2015:

In 2017, the cigarette smoking rate among Wyoming adults was 19%, with no statistically significant gender difference. For comparison, the median for all states and territories was 17%. The smokeless tobacco use rate for Wyoming adults was 9%, much higher than the national median of 4%. Smokeless tobacco use in Wyoming has a statistically significant gender difference (Behavioral Risk Factor Surveillance System [BRFSS], 2017). In 2017 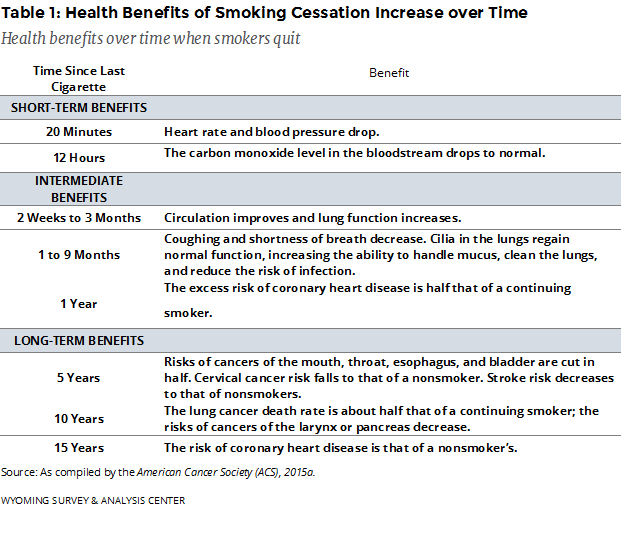 Quit Attempts by Youth in Wyoming

Quit Attempts by Adults in Wyoming 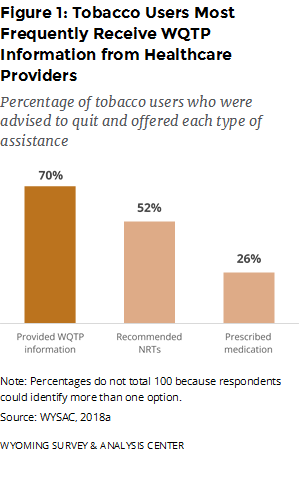 Healthcare professionals play a vital role in the Wyoming TPCP’s efforts to increase the number of individuals who quit using tobacco. Healthcare providers can screen their patients for tobacco use. Over half (55%) of current tobacco users who had seen a healthcare provider in the past year were advised by a health professional to quit using tobacco. This result has remained stable since 2010. This advice most often included information about the WQTP. Prescriptions for cessation medication were the least common form of assistance provided (Figure 1; WYSAC, 2018a).

The WQTP assists Wyoming residents who want to quit using tobacco by offering them telephone-based cessation coaching and nicotine replacement therapies (NRTs) or prescription medications. On February 15, 2016, the WQTP began offering free Chantix (the most popular prescription medication) to enrollees. The WQTP requires enrollees to use phone coaching to order NRTs or be eligible for free Chantix.

WYSAC conducts monthly surveys of WQTP enrollees seven months after their enrollment for the Wyoming Department of Health, Public Health Division. The majority of people who enroll in the WQTP do so to get help quitting cigarettes, though some seek help quitting smokeless tobacco, ENDS, and/or other tobacco (e.g., cigars, cigarillos, little cigars, hookah, and pipes).

Phone coaching is often the most commonly used of the three major program components (phone coaching, NRTs, and prescription medications). Most enrollees used NRTs, which are mailed to enrollees’ homes for free.

National Jewish Health has been the WQTP service provider since 2013. Over that time, they have helped 30% of enrollees quit using tobacco, as defined by 30 days of abstinence from using tobacco products (not including vaping/electronic nicotine delivery devices) when interviewed seven months after enrollment (WYSAC, 2018b).

WQTP enrollees are a unique subpopulation of Wyoming tobacco users trying to quit. They are more likely to be successful in quitting than the broader population of Wyoming tobacco users. Based on the 2017 Wyoming Adult Tobacco Survey (ATS) data (WYSAC, 2018a) Wyoming cigarette smokers who made a recent quit attempt without using any cessation aids had a 16% success rate. The cumulative quit rate for National Jewish Health is 30% (WYSAC, 2018b), suggesting that WQTP enrollees are 1.9 times more likely to quit than Wyoming smokers who made a recent quit attempt without using cessation aids. Using WQTP components (such as coaching, Chantix, or NRT) greatly increases enrollees’ chances of quitting. Enrollees who use coaching and medication often see the greatest success rates. The requirement to complete coaching to obtain medication makes it difficult to tell which of these components is the primary contributor to this success.