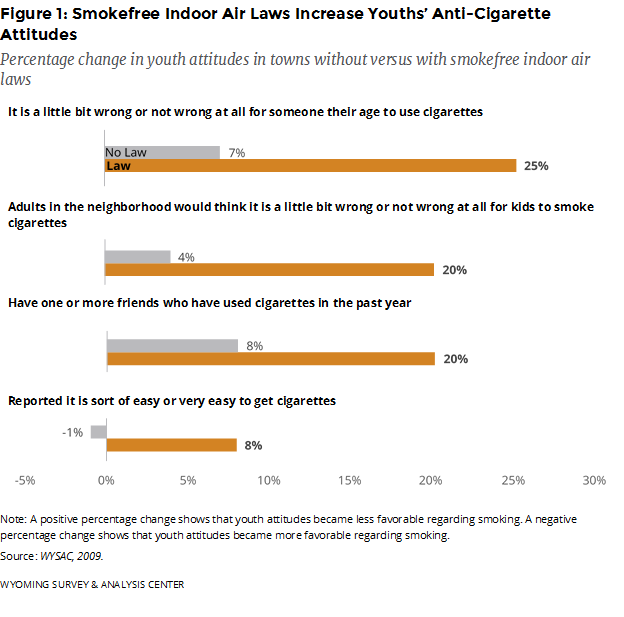 In 2009, WYSAC compared towns in Wyoming with comprehensive smokefree indoor air laws to similar towns in Wyoming without comprehensive smokefree indoor air laws. The analyses examined the effect of these laws on attitudes toward tobacco use and smoking behaviors among youth and adults. The full report, including a description of the comparison towns, is available at https://wysac.uwyo.edu/wyomingtobacco/. 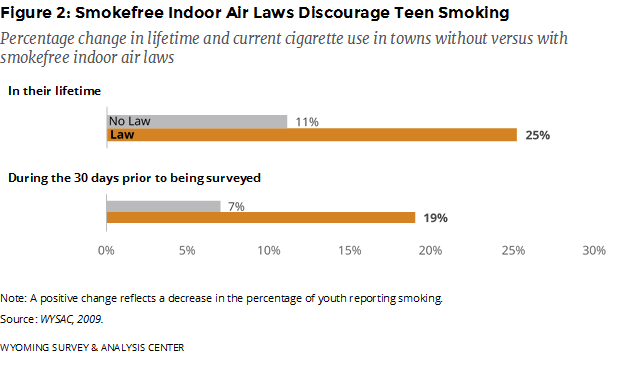 WYSAC’s analysis did not show any statistically significant differences for measured adult attitudes regarding smoking or the percentage of adults who smoked, how much those adults smoked, or those adults’ attempts to quit smoking between Wyoming towns with comprehensive smokefree indoor air laws and comparison towns.

Overall, exposure to secondhand smoke increases the risk of heart attacks (medically described as acute myocardial infarction). Diseases of the heart, such as heart attacks, are the leading cause of death in Wyoming (CDC, National Center for Health Statistics, 2017). Meyers, Neuberger, & He (2009) conducted a literature review and meta-analysis of studies published between 2004 and 2009 and found that smokefree indoor air policies protect the public fromheart attacks. Data from towns (including Helena, Montana, and Pueblo, Colorado) also show that smokefree indoor air laws decrease this risk. Young people and nonsmokers benefit the most from this effect. Myers and colleagues noted that the laws have short-term effects, but it may take years to show their full effects. Vander Weg, Rosenthal, and Vaughn Sarrazin (2012) examined the effects of local and state-level smokefree indoor air laws covering restaurants, bars, and workplaces passed in the United States between 1991 and 2008. They focused on the hospitalizations of Medicare beneficiaries aged 65 and older. In the three years after the laws went into effect, hospital admission rates for heart attacks fell.

Mackay, Irfan, Haw, and Pell (2010) pooled data from 17 studies and found strong evidence that smokefree air laws reduce the risk of heart attack in those communities, and that this protection increases over time. In a prestigious Cochrane Review, Callinan, Clarke, Doherty, and Kelleher (2010) found that smokefree air laws reduced exposure to secondhand smoke in public places, especially for people working in restaurants, bars, and other hospitality workplaces. These findings are consistent with CDC’s logic models.

One potential unintended consequence of smokefree air policies covering public places is moving that smoking to homes, potentially around children. Callinan et al. (2010) found no evidence for such a shift in their review of published studies. This finding was replicated in a study conducted by McGeary, Dave, Lipton, and Roeper (2017). On the contrary, McGeary et al., like some of the studies reviewed by Callinan et al., found reductions in exposure to secondhand smoke at home after laws covering public places were enacted.

Collectively, chronic obstructive pulmonary disorder (COPD) and other lower respiratory diseases are the fourth leading cause of death in Wyoming (CDC, National Center for Health Statistics, 2017). Hahn, Rayens, Adkins, Simpson, and Frazier (2014) compared data from regions in Kentucky that had municipal smokefree indoor air laws to regions that did not have such laws. They found that people living in towns with comprehensive laws had a 22% reduced risk of hospitalization for COPD compared to people living in towns with non-comprehensive laws or no laws at all. Vander Weg and colleagues (2012) found that Medicare-billed hospital admission rates for COPD fell by 15% in the first three years after implementing comprehensive smokefree indoor air laws.

2. Including all data points after the law was implemented and data for several years before,

3. Using statistical methods that control for trends and random fluctuation in the data, and

The 2006 Surgeon General’s report (USDHHS, 2006) also examined numerous studies of state and local smokefree laws: “Evidence from peer-reviewed studies shows that smokefree policies and regulations do not have an adverse economic impact on the hospitality industry” (p. 16).

Most recently, Hopkins, Leeks, Kaira, Chattopadhyay, and Soler (2010) also reviewed the published literature and found that smokefree air laws reduce tobacco use and identified four studies that showed economic benefits from smokefree policies in the workplace.

Scollo, M., & Lal, A. (2005). Summary of studies assessing the impact of smoking restrictions on the hospitality industry: Includes studies produced to July 2005. Retrieved June 7, 2012, from http://www.vctc.org.au/tc-res/Hospitalitysummary.pdf

Scollo, M., Lal, A., Hyland, A., & Glantz, S. (2003). Review of the quality of studies on the economic effects of smokefree policies on the hospitality industry. Tobacco Control, 12, 13–20. Retrieved January 16, 2008, from http://tobaccocontrol.bmj.com/content/12/1/13 .full.pdf+html?maxtoshow=&HITS=10&hits=10&RESULTFORMAT=&author1=scollo&andorexactfulltext=and&searchid=1&FIRSTINDEX=0&sortspec=relevance&resourcetype=HWCIT

U.S. Department of Health and Human Services. (2014). The health consequences of smoking – 50 years of progress: A report of the Surgeon General. Retrieved January 21, 2014, from http://www.cdc.gov/tobacco/data_statistics/sgr/50th-anniversary/index.htm