Chronic disease is a general term that refers to illnesses that progress slowly and last a long time (World Health Organization [WHO], 2014), such as cancer, heart disease, and diabetes. Chronic diseases are the leading causes of death and sickness in the United States and Wyoming (Centers for Disease Control and Prevention, National Center for Health Statistics [CDC, NCDHS], 2017). “Smoking remains the leading preventable cause of premature disease and death in the United States” (U.S. Department of Health and Human Services [USDHHS], 2014, p. iii).

“Tobacco smoke damages every organ in the body and causes disease and death” (USDHHS, 2014, p. i). As of 2015, more than 16 million people in the United States live with at least one serious illness or disease caused by smoking (USDHHS, 2015). In the United States, 480,000 people die prematurely each year from tobacco use and exposure to secondhand smoke (USDHHS, 2014). For each person who dies from tobacco use, another 20 people have at least one tobacco-related illness (CDC, 2003). The total private and state economic costs of smoking are high in Wyoming: $450 million from lost productivity in 2010 (WYSAC, 2012b) and almost $258 million in total health care costs (Smoking Attributable Mortality, Morbidity, and Economic Costs [SAMMEC]—Smoking Attributable Expenditures [SAE], 2017).

Although there is no safe level of exposure to tobacco smoke, greater exposure increases the risk and severity of chronic disease. Cigarette smoke contains carcinogens and chemicals linked to biological mechanisms that contribute to poor reproductive and dental health and cause heart (cardiovascular) diseases, lung (pulmonary) diseases, and breathing (respiratory) diseases. Cigarette smoke is made up of more than 7,000 toxic chemicals, including ammonia, tar, and carbon monoxide. These chemicals increase the risk for developing several preventable chronic diseases for smokers and those who breathe secondhand smoke (USDHHS, 2014). 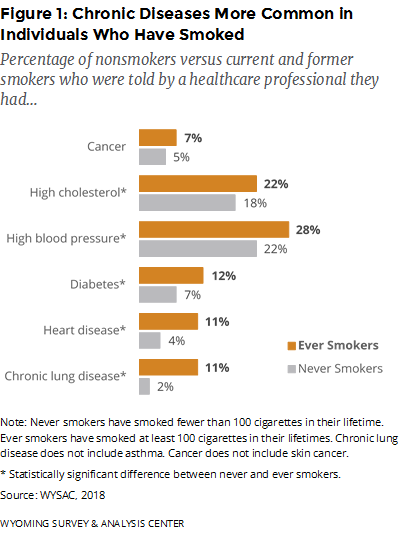 Research has consistently shown that exposure to secondhand smoke is detrimental to human health (e.g., Ono et al., 2011). Even with low levels of exposure, chemicals in cigarette smoke increase the risk of cardiovascular illness, cancer, respiratory disease, and death (including Sudden infant death syndrome [SIDS]. More than 100,000 smoking-caused deaths over the last 50 years were of babies who died of SIDS or other health conditions (CDC, 2014a; USDHHS, 2014). Each year in the United States (CDC, 2014a)

Akinbami, Kit, and Simon (2013) found that exposure to secondhand smoke was associated with exacerbation of asthma symptoms in children, including sleep disturbance, activity limitations, and wheezing during exercise. In other research, exposure to secondhand smoke has been associated with impaired lung function in children, which is related to chronic obstructive pulmonary disease (COPD) in adulthood (Johannessen, Bakke, Hardie, & Eagan, 2012).

Tobacco use is the leading preventable cause of chronic diseases, including heart disease, cancer, respiratory diseases, and high blood pressure. Each of these is a leading cause of death (USDHHS, 2014). In 2016, cardiovascular disease, cancer, and chronic lower respiratory diseases were the first, second, and fourth leading causes of death in Wyoming, respectively (CDC, NCDHS, 2017).

The 2014 Surgeon General’s Report (USDHHS, 2014) included several additions to the list of smoking-attributable diseases and other health effects (Figure 2). These include liver and colorectal cancer, diabetes mellitus, ectopic pregnancy, erectile dysfunction, age-related macular degeneration, orofacial clefts in newborns (as a result of maternal smoking), rheumatoid arthritis, and health problems such as inflammation and impaired immune functioning. In addition, exposure to secondhand smoke is now a listed cause of stroke. 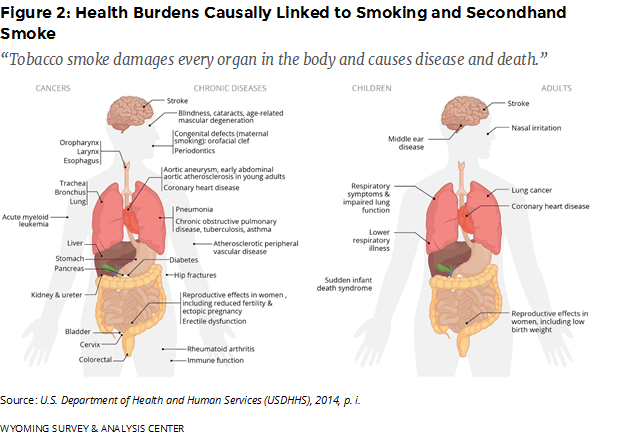 In 2016, diseases of the heart were the leading causes of death in Wyoming (CDC, NCDHS, 2017). Over the past three decades, national and international research has deemed cigarette smoking one of the top three leading risk factors for coronary heart disease (Roger et al., 2011). Cigarette smoking, by itself and in combination with other risk factors, greatly increases the risk of poor heart health (American Heart Association [AHA], 2014). In fact, the AHA considers smoking to be the most important risk factor for preventable heart disease among men and women. The risk of developing coronary heart disease is two to four times greater for smokers than for nonsmokers. Nonsmokers who are exposed to secondhand smoke, depending on the frequency and duration of exposure, are also at greater risk for developing coronary heart disease than those who are not exposed to secondhand smoke.

In 2016, cancer was the second leading cause of death in Wyoming (CDC, NCDHS, 2017). When adjusting for age, lung cancer was the deadliest and third most common form of cancer in Wyoming and the United States between 2008 and 2012 (U.S. Cancer Statistics Working Group, 2013). Smoking increases the risks of many other cancers (see Figure 2; USDHHS, 2014).

Quitting smoking reduces the risk of cancer. Ten years after quitting, risks of cancers of the mouth, throat, esophagus, and bladder are cut in half. Cervical cancer risk falls to that of a nonsmoker (ACS, 2015). Moolgavkar et al. (2012) estimated that, between 1975 and 2000, tobacco control policies in the United States changed smoking behavior and prevented approximately 800,000 lung cancer deaths.

In 2016, chronic lower respiratory diseases, such as COPD, were the fourth leading causes of death in Wyoming (CDC, NCDHS, 2017). COPD refers to a group of lung diseases characterized by obstruction of airflow that interferes with normal breathing. Smoking cigarettes is the main cause of COPD (Decramer, Janssens, & Miravitlles, 2012), with approximately 85–90% of COPD cases attributable to smoking (ALA, 2013b).

Cigarette smoke causes direct injury to airway cells (Decramer et al., 2012) and may hasten the aging of lungs, thus accelerating the progression of COPD (Kazuhiro & Barnes, 2009). In 2013, more than 11 million U.S. adults had confirmed cases of COPD, but approximately 24 million more may have had it without knowing (ALA, 2013a).

Quitting smoking has health benefits related to lung function. One to nine months after quitting, the cilia in the lungs regain normal function, increasing the ability to handle mucus, clean the lungs, and reduce the risk of infection (ACS, 2015).

In 2016, stroke (cerebrovascular disease) was the fifth leading cause of death in Wyoming (CDC, NCDHS, 2017). Smoking doubles the risk of stroke for both men and women compared to nonsmokers (National Stroke Association [NSA], 2013).

Quitting smoking greatly reduces the risk of smoking-induced strokes. Two to five years after quitting, the risk of stroke decreases to that of nonsmokers (ACS, 2015).

According to a recent meta-analysis of 20 studies, breathing secondhand smoke significantly increases the chance of stroke in nonsmokers, even with low levels of exposure (Ono, Mackay, & Pell, 2011).

American Lung Association. (2013a). How serious is COPD: COPD prevalence in adults by state, 2013. Retrieved April 18, 2016, from http://www.lung.org/lung-health-and-diseases/lung-disease-lookup/copd/learn-about-copd/how-serious-is-copd.html

U.S. Department of Health and Human Services. (2014). The health consequences of smoking – 50 years of progress: A report of the Surgeon General. Retrieved January 21, 2014, from http://www.cdc.gov/tobacco/data_statistics/sgr/50th-anniversary/index.htm