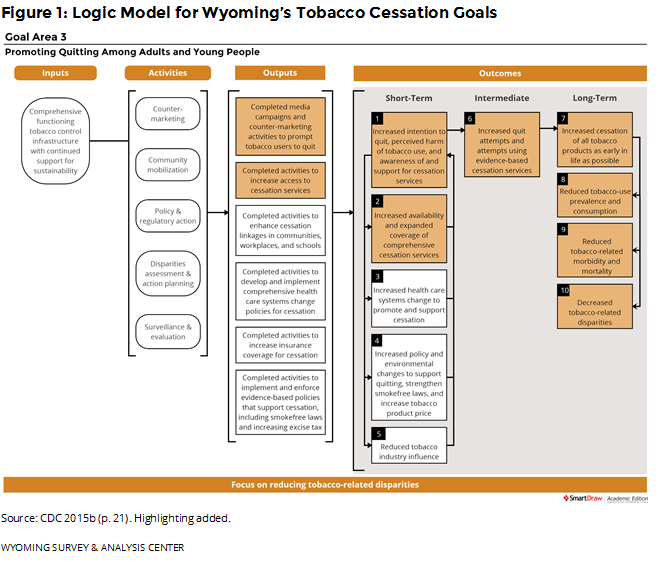 Under contract to the Wyoming Department of Health, Public Health Division, the Wyoming Survey & Analysis Center (WYSAC) at the University of Wyoming conducts a monthly survey of WQTP enrollees to assess quit rates and enrollee satisfaction. The survey also assesses enrollees’ use of Quitline coaching, NRTs, or prescription medications and enrollees’ opinions of different program elements. This report includes data on WQTP participants surveyed between January and June 2017, seven months after they enrolled in the WQTP. These participants enrolled in the WQTP between June and November 2016. During this period, National Jewish Health provided WQTP services in Wyoming.

How many people did WQTP serve between June and November 2016? Figure 2 provides the monthly enrollment for June–November 2016. For comparison, this figure also shows the same months from the previous year. Enrollees may sign up by completing an intake survey online or by phone. 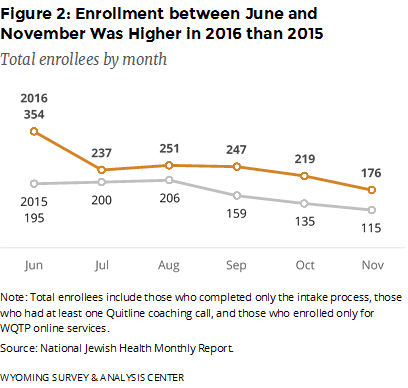 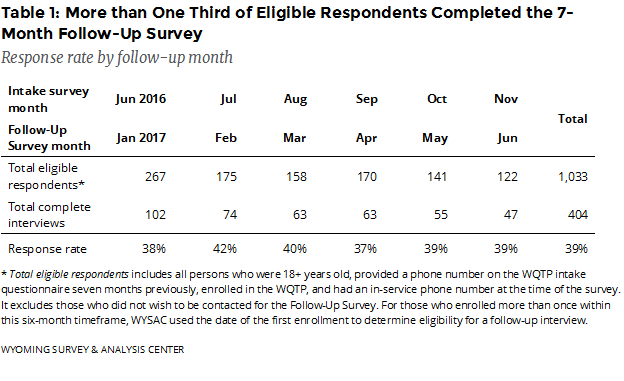 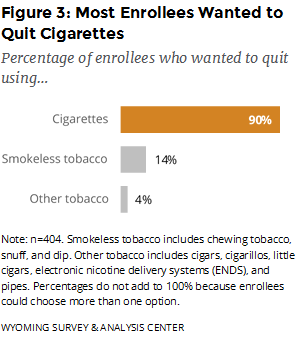 Which type of tobacco products did enrollees want help quitting? Enrollees could choose more than one option, but nine out of 10 enrolled in the WQTP to get help with quitting cigarettes (Figure 3).

Which program components were enrollees most likely to use? The Quitline was the most commonly used of the three major program components (Quitline, NRTs, and prescription medications; Figure 4). Most enrollees used NRTs, which are mailed to enrollees’ homes for free. Enrollees can order NRTs by going through the Quitline phone coaching or the online support program. Starting March 1, 2017, the WQTP required enrollees to use the Quitline phone coaching to order NRTs.

On February 15, 2016, the WQTP began offering free Chantix to enrollees. This report includes data from people who enrolled after this programmatic change. (See Special Section: Free Chantix and the WQTP for details related to the offer of free Chantix.) Enrollees can order prescription medications only by going through the Quitline phone coaching. Nearly one quarter of enrollees used prescription medications such as Chantix. 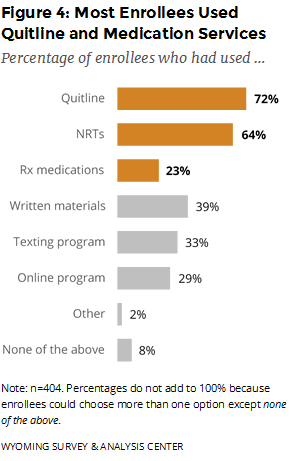 Relatively few enrollees, 32 (8%), reported not using any program component (i.e., none of the above). These enrollees may have completed the intake questionnaire without participating in any other program component. Because these responses are self-reported, respondents’ perspectives or memories about using the program may differ from National Jewish Health’s administrative records. Still, these enrollees form a useful comparison group for gauging the effectiveness of different program components. 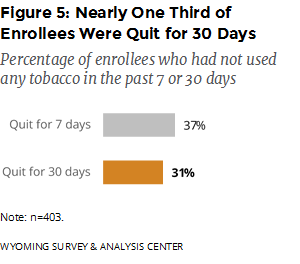 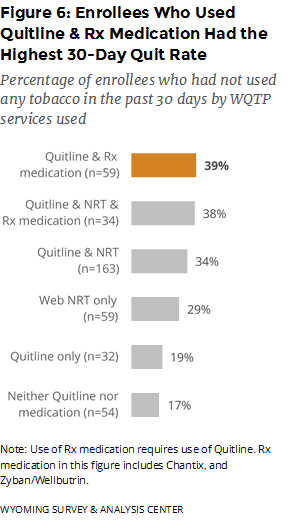 Which program component was most effective? The best outcome was associated with those who used both Quitline coaching and prescription medications. These enrollees had the highest 30-day quit rate (39%), seven months after enrollment (Figure 6).

Few enrollees use prescription medications other than Chantix. A separate Follow-Up Survey item asked, “Since you enrolled in the Wyoming Quit Tobacco Program, have you used any of the following prescription medications?” Unless they said none of the above, enrollees could choose more than one option for this question. Relatively few enrollees, 29, reported using bupropion (including the specific brands Zyban and Wellbutrin), compared to 84 enrollees who reported using Chantix. 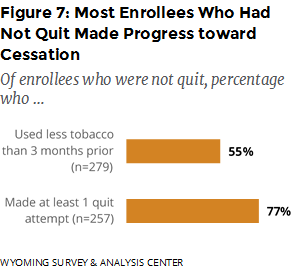 Did those who did not quit make progress toward cessation? WYSAC asked those who had not quit about changes in tobacco consumption and quit attempts (stopping the use of tobacco for 24 hours or longer since enrolling in the WQTP). Over half reported using less tobacco compared to three months prior to the survey, and 77% reported making at least one quit attempt since enrolling (Figure 7). 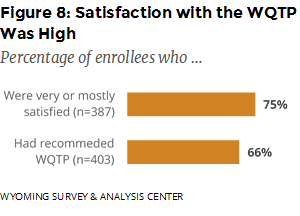 How satisfied were enrollees with the service they received from the WQTP? About one fourth (18%) were mostly satisfied, and 58% were very satisfied with the WQTP. Almost two thirds (66%) reported that they had recommended the program to someone else (Figure 8). 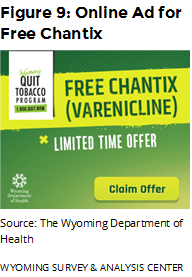 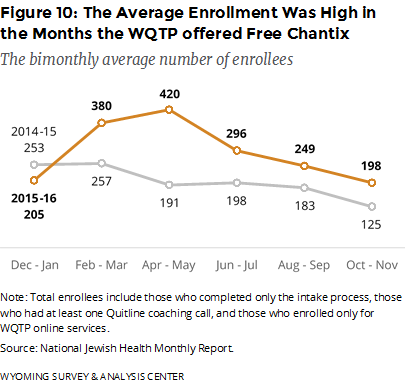 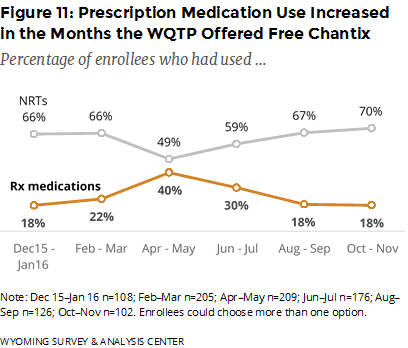 Did the offer of free Chantix affect the use of WQTP components? The use of prescription medications such as Chantix increased after the WQTP started offering free Chantix, peaked in April–May, and tapered off to the previous rates occurring prior to the free Chantix (Figure 11).

It appears that the offer of free Chantix positively affected enrollment and the use of prescription medication for about six months. After six months, those effects dissipated. 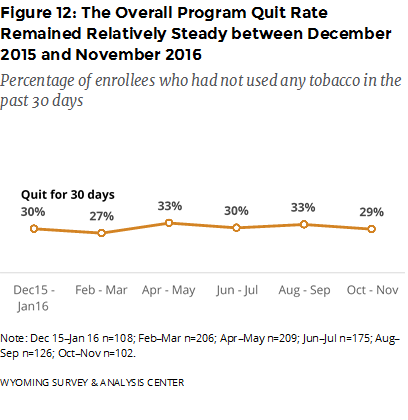 Did the effectiveness of Chantix improve the overall quit rate? Although Chantix users have a relatively high quit rate, overall program quit rate does not seem to depend on the status of free Chantix (Figure 12). Overall program satisfaction was also fairly stable across the six time periods.

Have enrollees ever used ENDS or other similar nicotine products? If so, why did they use them? Over half (55%) of enrollees had used ENDS in their lifetime (Figure 13). Moreover, 81% of enrollees who had used ENDS used them to quit or cut-down on other tobacco although they are not approved as cessation aids by the U.S. Food and Drug Administration (FDA, 2016). 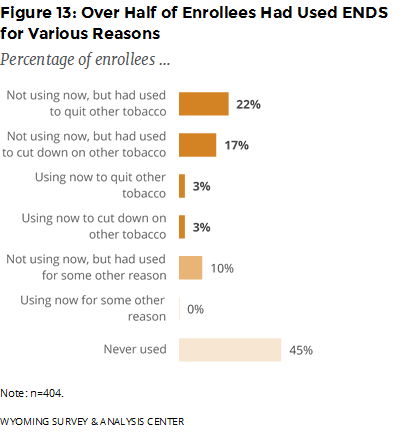 Only one enrollee had used other alternative nicotine products (such as Nicogel, orbs, or Camel strips) that are not approved as smoking cessation products. 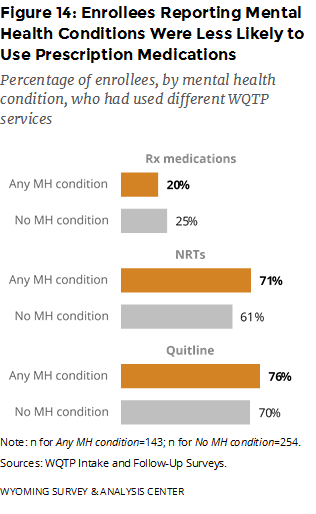 Five of the 16 enrollees who said they were pregnant at the time of enrollment responded to the Follow-Up Survey. All five had enrolled in the specialty program for pregnant women. None of them had been quit for at least 30 days prior to being surveyed. Two of these five reported using less tobacco than three months prior. Four reported making at least one quit attempt since enrolling. The small sample size means that it is not possible to generalize the results to all pregnant WQTP enrollees.

Two of the seven American Indians who enrolled in the AICTP completed the Follow-Up Survey. One of them had been quit for at least 30 days prior to being surveyed. The other respondent was using tobacco products at the time of follow-up, reported using about the same amount than three months prior, and had made no quit attempt since enrolling. The small sample size means that it is not possible to generalize the results to all American Indian enrollees. 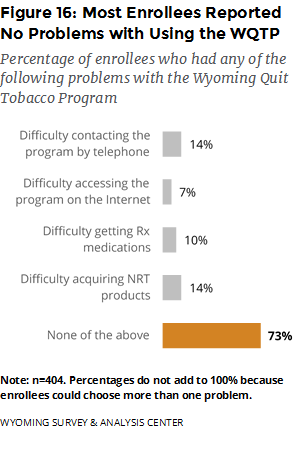 What did enrollees report about the strengths and weaknesses of the WQTP? Most enrollees (73%) reported no problems with using the core program components (Figure 16). Among those who reported difficulty, contacting the program by telephone and acquiring NRT products were the most problematic, followed by acquiring prescription medications.

The data for WQTP enrollees who completed the Follow-Up Survey between January and June 2017 (meaning they enrolled between June and November 2016) show that nine out of 10 program participants enrolled to get help with quitting cigarettes. Most enrollees used the Quitline. In addition, compared to the previous semiannual report (WYSAC, 2017), prescription medication use decreased from 28% to 23% while NRT use increased from 59% to 64%.

Nearly one third (31%) of enrollees reported being quit for at least 30 days. This quit rate is at about the same level as the 30-day quit rate (30%) reported in the previous semiannual report (WYSAC, 2017). Those who used Quitline coaching and any prescription medication (including Chantix and Zyban/Wellbutrin) had the highest 30-day quit rate (39%). The quit rate for enrollees who used Quitline coaching and Chantix—but not Zyban/Wellbutrin—was virtually the same (39%).

Satisfaction with WQTP was high: 75% of enrollees reported being very or mostly satisfied with the program, and the majority (66%) had recommended the WQTP to someone else. Data from the previous semiannual report indicated similar high levels of program satisfaction.

The majority (73%) of respondents reported no problems with the WQTP. Among those who reported difficulty, contacting the program by telephone and acquiring NRT products was the most problematic, followed by acquiring prescription medications.

WYSAC analyzed follow-up data for four priority populations: those who used alternative nicotine products such as ENDS, those who reported mental health conditions, those who participated in the pregnancy program, and those who participated in the AICTP. More than half (55%) of enrollees had used ENDS in their lifetime. Of these, 81% had used them to quit or cut-down on other tobacco even though they are not approved as cessation aids by the FDA (2016). Enrollees reporting mental health conditions were slightly less likely to use prescription medications but more likely use NRT and Quitline phone coaching than those reporting no such conditions. They are also less likely to be quit for 30 days. The sample sizes for those in the pregnancy program and the AICTP are too small to draw conclusions about those programs or to generalize to other WQTP enrollees.