In the United States, children and teens constitute the majority of all new smokers (Substance Abuse and Mental Health Services Administration [SAMHSA], 2014). The earlier young people begin using tobacco products, the more likely they are to use them as adults and the longer they will remain users (Institute of Medicine, 2015). Two of the four key goals the Wyoming Tobacco Prevention and Control Program (TPCP) shares with the federal tobacco prevention and control program are to (a) reduce youth initiation of tobacco use (Centers for Disease Control and Prevention [CDC], 2014) and (b) promote quitting tobacco use, including among youth (CDC, 2015).

Wyoming’s youth prevalence rates for smoking cigarettes have generally been near the national average, and both have been decreasing. (Comparisons of Wyoming and U.S. rates have not been possible since 2015 because Wyoming stopped participating in the Youth Risk Behavior Surveillance System [YRBSS].) Most of Wyoming’s 2015 high school smokers had made at least one quit attempt in the past year (YRBSS, 2015). 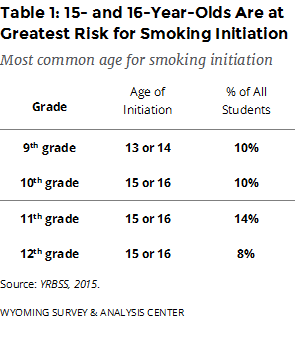 Youth who have never smoked can be identified as susceptible to smoking based on their estimated likelihood of smoking. Farrelly et al. (2013) operationalized smoking susceptibility as answering anything but “definitely not” to two questions from the National Survey on Drug Use and Health (NSDUH): “If one of your best friends offered you a cigarette would you smoke it?” and “At any time during the next 12 months do you think you will smoke a cigarette?” Susceptibility to smoking among never smoking youth decreased from 23% to 20% between 2002 and 2008. 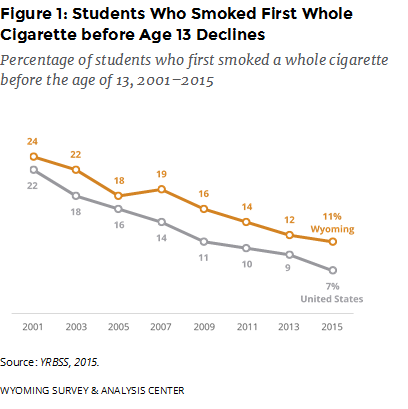 Smoking initiation is defined as the age at which a person first smokes one whole cigarette. According to the YRBSS (2015), teens aged 15 or 16 are at the highest risk for smoking initiation. More students in 10th, 11th, and 12th grades report smoking initiation at that age than at other ages (Table 1). As a point of reference, teens typically turn 15 during 9th grade, meaning relatively few 9th graders would be old enough to report starting smoking at that age. 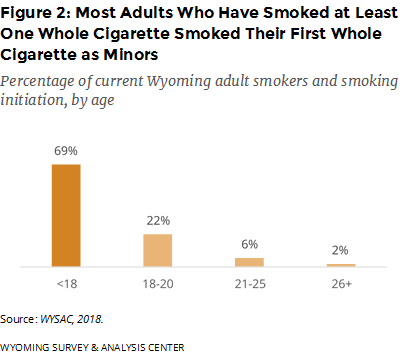 Overall, it is clear that most Wyoming adults who are or have been regular smokers began smoking before the legal age of 18. Among Wyoming adults who had smoked a whole cigarette, about seven out of 10 smoked their first whole cigarette when they were younger than 18 years old. Few (8%) started smoking after the age of 20 (Figure 2). Very few adults begin to smoke or begin to smoke daily after the age of 21; 15% of current and former daily smokers first began smoking daily when younger than 21 (WYSAC, 2018).

Youth Prevalence of Cigarette Smoking: Wyoming and the United States 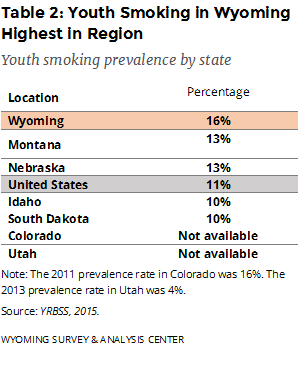 Over time, preventing young people from starting to smoke and increasing the number of young smokers who quit can reduce the number of adults who smoke. Decreasing the prevalence of smoking among youth and adults can greatly improve community health (Institute of Medicine, 2015). 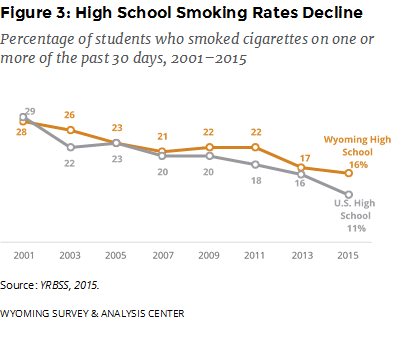 Between 2001 and 2015, the smoking rates for Wyoming and U.S. students declined. The trend among Wyoming high school students is similar to the national trend (Figure 3; YRBSS, 2015).

Prevalence of Smokeless Tobacco Use 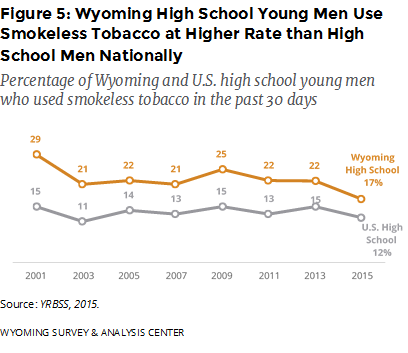 Prevalence of Youth Use of Electronic Delivery Systems (ENDS)

Electronic nicotine delivery systems (ENDS; also known as e-cigarettes, e-cigs, or vape-pens) are battery powered devices that produce an aerosol by heating a liquid instead of producing smoke from burning tobacco. Contents of the liquid vary across products, and some models allow for customized liquids. As of May 2016, the U.S. Food and Drug Administration (FDA) considers ENDS to be tobacco products. Regulations prohibiting the sale of ENDS to minors went into effect on August 8, 2016.

Social and demographic factors play a role in youth tobacco initiation. Communities with low socioeconomic status, lower overall education, and higher unemployment tend to have a higher prevalence of youth smoking (Bernat, Lazovich, Forster, Oakes, & Chen, 2009). Tobacco use by peers (U.S. Department of Health and Human Services, 2012), perceived social acceptability of tobacco use among peers, and having a parent who smokes are strongly associated with youth initiation of tobacco use (Albers, Biener, Siegel, Cheng, & Rigotti, 2008). 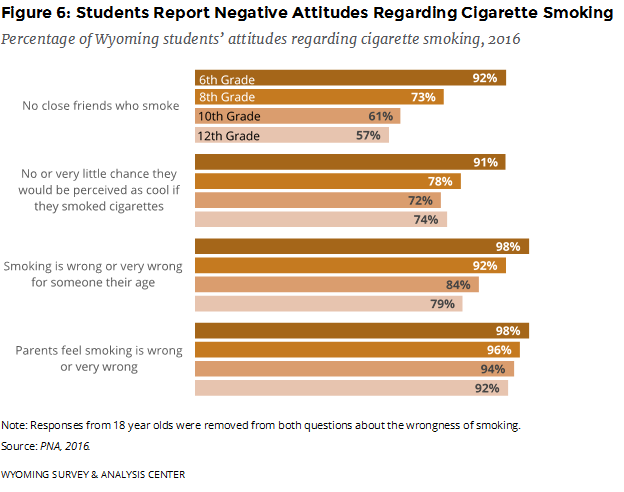 Attitudes Regarding Smokeless Tobacco Use 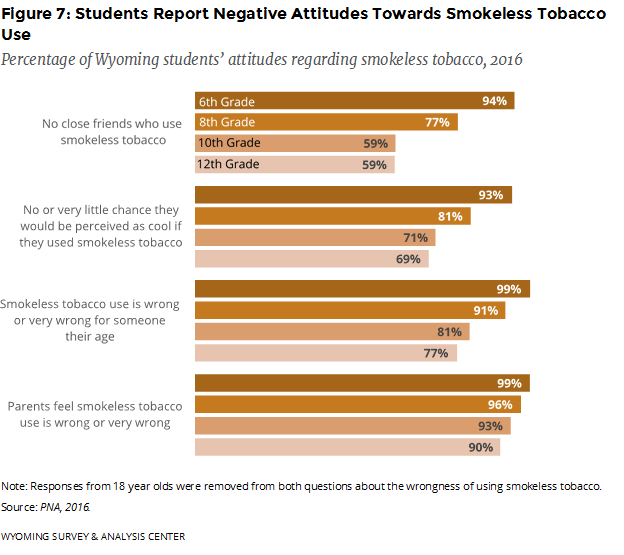 U.S. Food and Drug Administration. (2016). Extending Authorities to All Tobacco Products, Including E-Cigarettes, Cigars, and Hookah. Retrieved May 31, 2016, from http://www.fda.gov/TobaccoProducts/Labeling/ucm388395.htm