Two of the four key goals the Wyoming Tobacco Prevention and Control Program (TPCP) shares with the federal tobacco prevention and control program are: (a) increasing the number of people quitting tobacco use (Centers for Disease Control and Prevention [CDC], 2015) and (b) preventing young people from starting to use tobacco (CDC, 2014b). Taxing cigarettes is a well-documented and effective policy for governments to make further progress on both of these goals (CDC, 2014a; Hyland et al., 2005).

Taxation encourages tobacco users to quit or use less tobacco by increasing the price of cigarettes. Economic studies have demonstrated that increasing the unit price for tobacco products by 20% would reduce overall consumption of tobacco products by 10%, the percentage of adults who use tobacco by 4%, and the percentage of young people who start to use tobacco by 9% (see Guide to Community Preventive Service, 2015, for a summary of this research).

In 2014, WYSAC estimated that a $1.00 price increase in Wyoming would decrease the amount of cigarettes Wyoming adults smoke by 6% while generating $30.1 million (adjusted for inflation to 2018 dollars) of additional revenue during the first year (WYSAC, 2014).

Excise Taxes in Wyoming and in the United States 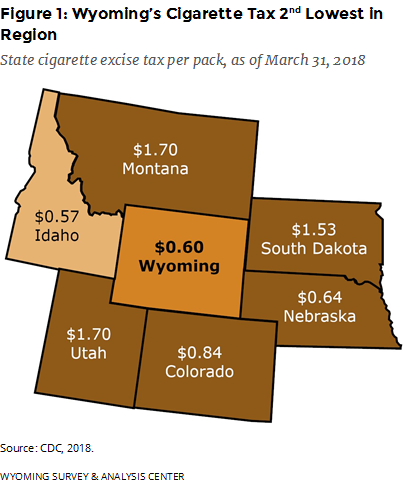 Across the nation, state cigarette excise tax rates range from a low of $0.17 per pack in Missouri to a high of $4.35 per pack in New York and Connecticut. As of March 31, 2018, the average state tax rate on cigarettes was $1.72 (not including the federal tax). Wyoming’s tax is the eighth-lowest in the nation (tied with the tobacco-producing state of Kentucky; CDC, 2018). Wyoming’s tax is the second-lowest in the region (Figure 1).

Although Wyoming’s excise tax rate has increased $0.52 since 1989, Wyoming’s rate has not kept pace with the national average (Figure 2; CDC, 2018; Orzechowski & Walker, 2015). Because Wyoming has increased its cigarette tax only once in the past 15 years, its tax rate has gone from close to the average for the 50 states in 1989 to substantially lower than average in the first quarter of 2018. 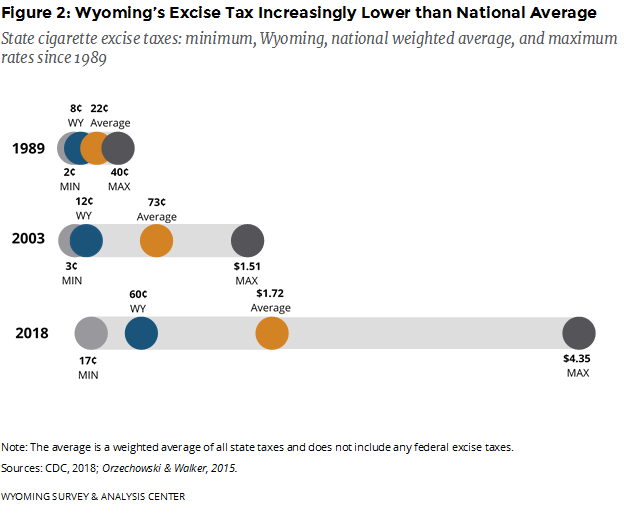 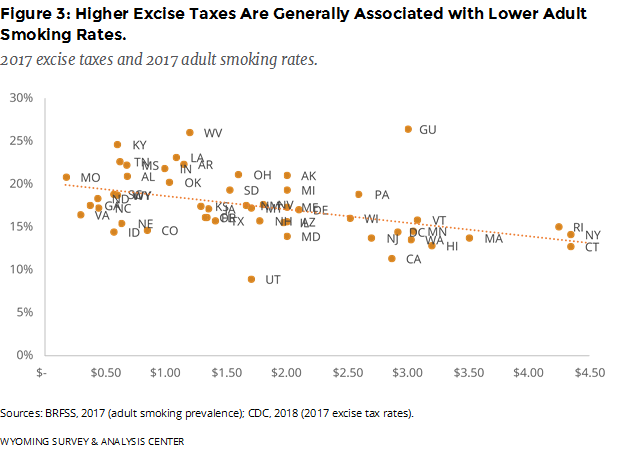 Consistent with CDC’s approach to prevention (CDC, 2015), States that have low percentages of adults who smoke cigarettes tend to have relatively high excise tax rates (Figure 3). 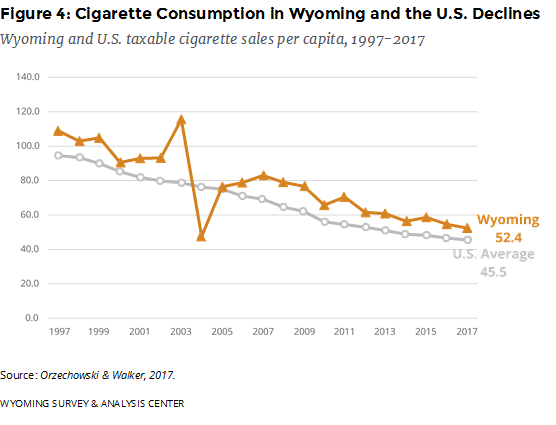 Since 1997, cigarette consumption in Wyoming and in the United States has declined. However, for most years since 1997, annual Wyoming per capita cigarette sales were about 10 packs higher than the national average (Figure 4; Orzechowski & Walker, 2015).

Researchers attribute these declines in consumption to increased cigarette prices (via taxation) and other factors, such as enactment of smokefree air laws and increased public awareness of the health risks associated with smoking (CDC, 2014a; Hahn et al., 2008; Keeler, Hu, Ong, & Sung, 2004; Lemstra, Neudorf, & Opondo, 2008).

Effects of Tax Increases on Cigarette Use and Tax Revenue

One unintended consequence of raising cigarette taxes could be for increased tax avoidance strategies, such as purchasing cigarettes from Native American reservations or neighboring states where taxes are lower. In 2017, Chaloupka reviewed research linking taxed cigarette sales in states that changed their taxes and their neighboring states and found that such tax avoidance practices are relatively uncommon. More importantly, research across the nation, including in Wyoming, based on actual taxed sales shows increased revenue that goes along with decreases in taxed sales, despite any tax avoidance.

Between 2002 and 2013, every tax increase between $0.52 and $1.60 was followed by a 7% to 42% decrease in consumption (as indicated by taxed sales) and a 14% to 260% increase in revenue. Mississippi, Michigan, and South Carolina implemented $0.50 tax increases in this same timeframe. Mississippi and Michigan saw decreases in consumption and increases in revenue. Cigarette sales in South Carolina increased despite the tax increase and, accordingly, the associated revenue increased substantially (Chaloupka & Huang, 2015). In 2017, an updateto this review found that four newer tax increases between $.050 and $1.00 resulted in 15% to 81% increased revenue and 6% to 33% decreases in taxed sales (Chaloupka & Huang, 2017). 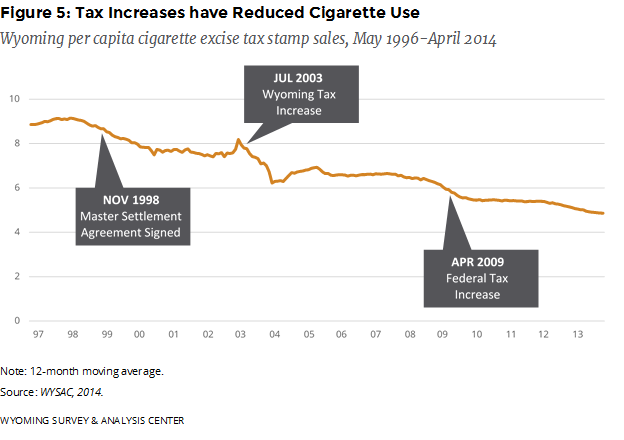 Without a direct measure of smokers’ cigarette consumption, WYSAC (2014) used data from cigarette tax stamp sales as a way to estimate that. Over the last two years of data (May 2012 to April 2014), monthly use of cigarettes in Wyoming was 4.9 stamps per capita compared to 7.6 stamps per capita for the two years prior to the 2003 tax increase. After accounting for other factors (e.g., federal tax increase, inflation, seasonality), WYSAC estimated that Wyoming’s $0.48 tax increase (equivalent to a 13% price increase) reduced monthly consumption by 6% while generating additional revenue, despite any tax avoidance efforts by smokers. WYSAC’s model predicts that an additional $1.00 tax increase would decrease consumption by another 6%, or 0.31 packs per capita per month (Figure 5). 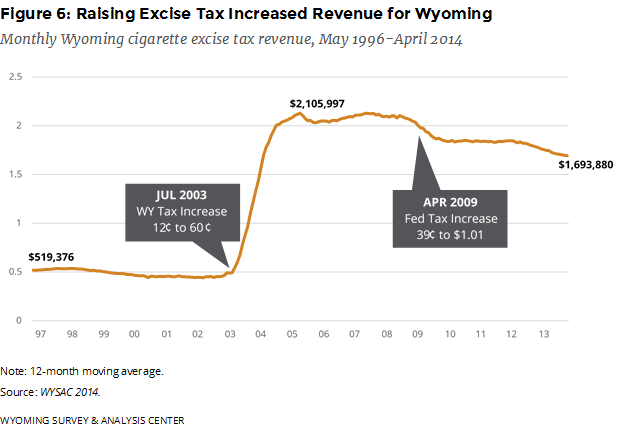