The earlier young people begin using tobacco products, the more likely they are to use them as adults and the longer they remain users (Institute of Medicine, 2015). One of the four goals the Wyoming Tobacco Prevention and Control Program (TPCP) shares with the federal tobacco prevention and control program is to reduce youth initiation of tobacco use. Limiting youth access to tobacco products may help reduce youth initiation of tobacco use (Centers for Disease Control and Prevention [CDC], 2014).

Tobacco retailers in Wyoming normally comply with Wyoming law regarding the sale of tobacco to minors (State of Wyoming, 2017; WYSAC, 2017a, 2017b). Continued educational and enforcement efforts will likely maintain this success.

Still, many students perceive that cigarettes are easily accessible (Prevention Needs Assessment [PNA], 2016), suggesting that minors in Wyoming may identify stores where they are likely to make successful purchase attempts or can rely on other ways of obtaining cigarettes, such as getting them from friends or relatives.

One important piece of legislation regarding youth access is the 1992 Synar Amendment (Section 1926 of Title XIX, Federal Public Health Service Act). The Substance Abuse and Mental Health Services Administration (SAMHSA, 2010) is responsible for enforcing this legislation and requires states to enact and enforce laws preventing the sale of tobacco to minors. In accordance with the Synar Amendment, Wyoming’s current youth access law (comprised of the eight sections of Wyoming Statute 14 Article 3; State of Wyoming, 2017) prohibits individuals from selling or delivering tobacco products to minors (youth under the age of 18) and prohibits minors from purchasing, possessing, or using tobacco, including electronic nicotine delivery systems (ENDS; also known as e-cigarettes). In 2000, Wyoming implemented a three-pronged approach to reduce youth access to tobacco products (Wyoming Department of Health, Public Health Division, 2014). This approach currently consists of the following actions:

Education through the Got ID? Program. The Wyoming Association of Sheriffs and Chiefs of Police (WASCOP), working with local community members, provides packets to tobacco retailers that educate the retailers about restricting sales of tobacco products to minors.

Synar inspections to monitor compliance without penalties for violations. During Synar inspections, trained 16- and 17-year-old inspectors use standardized protocols to attempt to purchase cigarettes or smokeless tobacco from a sample of Wyoming tobacco retailers accessible to minors. 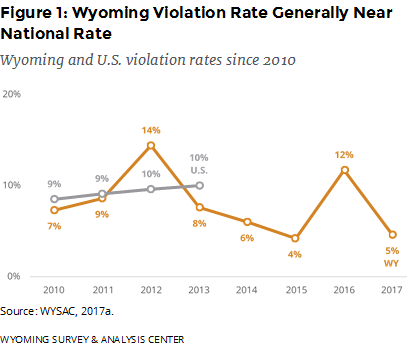 The U. S. Food and Drug Administration (FDA) also enforces laws against selling tobacco to people younger than 18.

Because retail access is only one of the ways youth can access cigarettes, this issue brief also includes student reports about how they access tobacco products and how easy they think it would be to get cigarettes. School restrictions are another regulatory approach to reduce youth access to tobacco products. 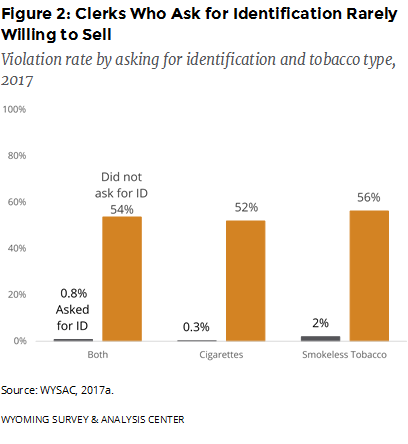 SAMHSA (2010) requires states to have a Synar violation rate under 20%. Despite changes to inspection methods over time (e.g., adding smokeless tobacco inspections in 2010), Wyoming’s Synar violation rate has generally been between 4% and 10% since 2000. The two exceptions were in 2012 and 2016 when three inspection trips (one in 2012, two in 2016) with high violation rates raised the state rates. In 2017, Wyoming’s violation rate was 4.6% (Figure 1). Clerks asking inspectors for identification has consistently been the strongest predictor of violations; clerks who ask for an ID (which inspectors do not provide) are unlikely to sell tobacco to a minor (see Figure 2 for the 2017 data; WYSAC, 2017a). 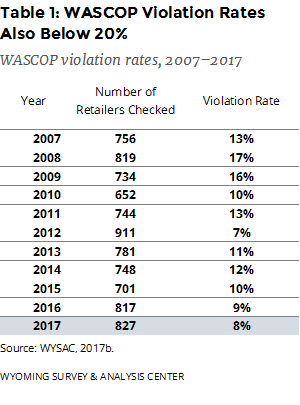 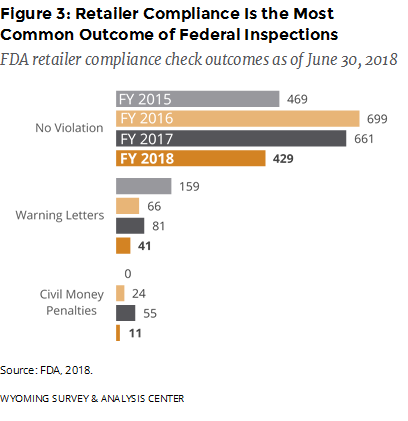 In 2015, 7% of Wyoming high school smokers younger than 18 years of age reported that they usually got their own cigarettes by buying them in a store or gas station. This percentage has been somewhat erratic since 2001 in both Wyoming and the United States (Figure 4; Youth Risk Behavior Surveillance System [YRBSS], 2015). 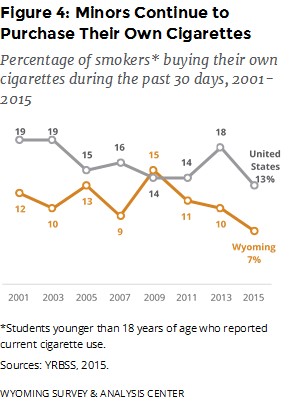 Limiting retail availability of cigarettes for youth is only part of restricting youth access to cigarettes. The development and implementation of programs to limit youth access to tobacco through means other than direct purchases could further reduce youth initiation of tobacco use and consumption of tobacco. Non-retail sources include relatives, unrelated adults or minors, buying it themselves, taking it, and other non-specified sources (PNA, 2016 [based on 2014 data as the most recent year the question was asked]; YRBSS, 2015). 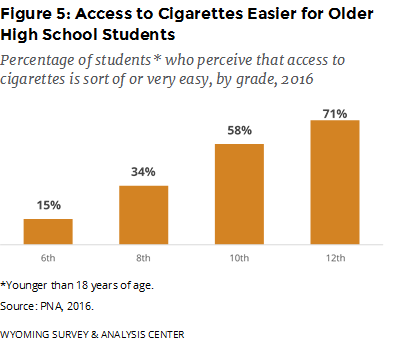 Implementing comprehensive tobacco-free polices on school property will likely reduce susceptibility to experimentation with tobacco products, youth initiation of tobacco products, and overall youth use of tobacco (CDC, 2014). School policies also make it more difficult for youth to use tobacco products during much of the day. A school is considered tobacco free when there is a policy that specifically prohibits the use of all types of tobacco (including cigarettes, smokeless tobacco, cigars, and pipes, but not necessarily ENDS) by all people (students, faculty, staff, and visitors), at all times (including during non-school hours), and in all places (including school-sponsored events held off campus). In 2016, 40% of Wyoming’s high schools were smokefree, often missing out on that designation because of policies related to off-site events (Brener et al., 2017).