Each year between 2005 and 2009, about 41,000 nonsmoking people in the United States died prematurely from heart disease or lung cancer caused by exposure to secondhand smoke (U.S. Department of Health and Human Services [USDHHS], 2014). One of the four key goals the Wyoming Tobacco Prevention and Control Program (TPCP) shares with the federal tobacco prevention and control program is to decrease exposure to secondhand smoke (Centers for Disease Control and Prevention [CDC], 2017a). The majority of Wyoming adults agree with the statement, “Secondhand smoke is very harmful to one’s health.” Further, 79% of Wyoming adults would support a law making the indoor areas of restaurants smokefree, and 80% would support a law for smokefree indoor work areas (WYSAC, 2018). Enactment, implementation, and enforcement of smokefree policies and laws protect the public from the dangers of secondhand smoke. Yet, 71% of Wyoming residents are not covered by a comprehensive smokefree indoor air law, making them vulnerable to secondhand smoke in public places.

If the number of smokefree policies and laws in Wyoming increases, more residents will live, dine, and work in smokefree environments. In time, the associated decrease in their exposure to carcinogens and other toxins should lead to a decrease in sickness and death caused by tobacco smoke (CDC, 2017a).

Smokefree Rules in the Home

Nonsmokers who live with people who smoke are more likely to be exposed to secondhand smoke than nonsmokers who do not live with smokers. Children and youth between the ages of 3 and 19 are especially likely to report exposure to secondhand smoke when they live with a smoker, suggesting that exposure at home is common (Kaufmann et al., 2010). In 2015, 32% of Wyoming adult smokers who lived with children younger than 17 said they never smoke in front of their children (WYSAC, 2017a). 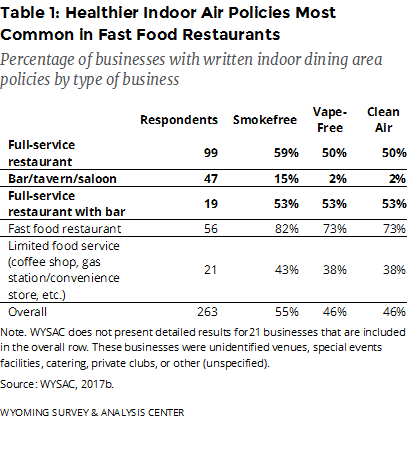 Children also depend on policies set by adults to protect them from secondhand smoke at school and at off-campus, school-sponsored events. A school policy is considered tobacco-free when there is a policy that specifically prohibits the use of all types of tobacco (including cigarettes, smokeless tobacco, cigars, and pipes, but not necessarily electronic nicotine delivery systems [ENDS]) by all people (students, faculty, staff, and visitors) at all times (including during non-school hours) and in all places (including school-sponsored events held off campus). According to the Wyoming 2016 School Health Profiles Report: Trend Analysis Report (2017), 40% of Wyoming high schools had tobacco-free policies, a statistically significant decrease from 50% in 2014. Off-campus events at locations that allow visitors to smoke or use other tobacco products are a key factor in keeping Wyoming schools’ policies from being tobacco free as are policies that do not include cigars or pipes.

Exposure to Secondhand Smoke in the Workplace

The proportion of Wyoming adults working indoors who are protected by smokefree polices at indoor workplaces increased slightly from 89% in 2010 to 93% in 2017. However, without consideration of workplace policies, 20% of Wyoming adults who work indoors reported exposure to secondhand smoke while at work during the previous week (WYSAC, 2018). 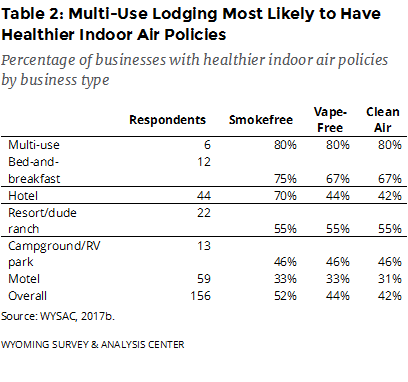 Voluntary smokefree policies in restaurants, bars, and other businesses also provide some protection from secondhand smoke (Guide to Community Preventive Services, 2015). In 2016, about half (51%) of Wyoming dining businesses (including bars) had a written policy about smoking or vaping. Written policies prohibiting smoking and vaping for all indoor areas (labeled Clean Air in Table 1) were most common among fast food restaurants. Full-service restaurants were more likely to have clean air policies than full-service restaurants with attached bars. Bars, taverns, and saloons (as a single category) were the least likely business type to have clean air policies (Table 1; WYSAC, 2017b).

In 2016, the prevalence of clean air policies differed across lodging business type. Indoor clean air policies were most common in multi-use businesses (e.g., a business that is both a motel and campground). Motels were the least likely to have smokefree and vape-free policies (WYSAC, 2017b; Table 2).

Smokefree Indoor Air Laws: Wyoming and Across the Nation 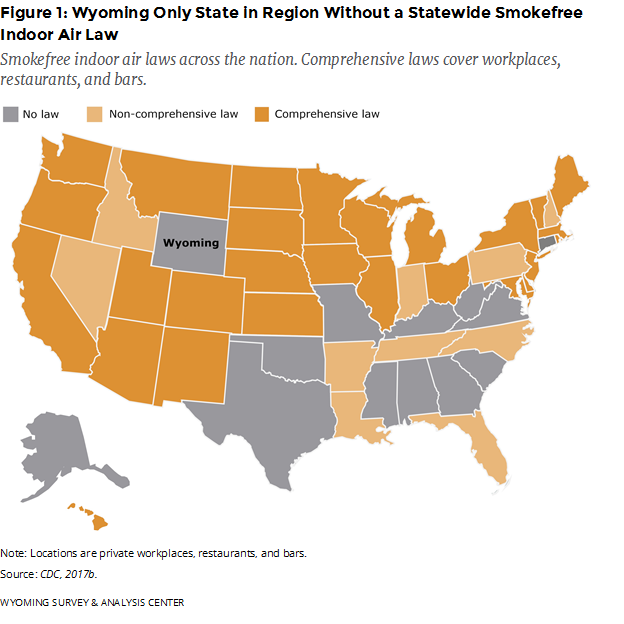 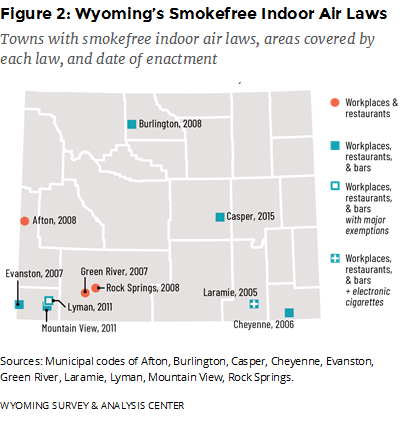 In 2015, most Wyoming adults had negative attitudes toward secondhand smoke. Almost all, 97%, of adults reported that breathing smoke from other people’s tobacco products was very (62%) or somewhat (35%) harmful to one’s health (WYSAC, 2018).

Support for Smokefree Indoor Areas of Workplaces, Restaurants, and Bars 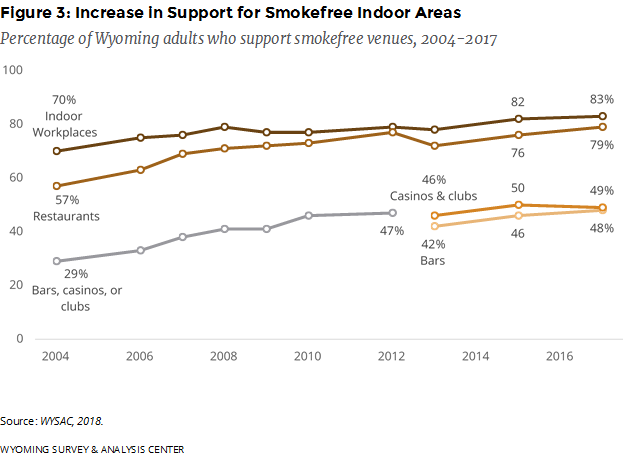