Concern about whether the use of ENDS will lead to combustible tobacco use is of interest to many (Barrington-Trimis et al., 2016). Thus, the Wyoming Tobacco Prevention and Control Program (TPCP) is gathering data on behaviors related to and health consequences of ENDS use. This issue brief summarizes key findings from early research literature and provides preliminary data for Wyoming compared to the United States.

ENDS are battery powered devices that produce an aerosol by heating a liquid instead of producing smoke from burning tobacco. Contents of the liquid vary across products, and some models allow for customized liquids. Public health concerns about ENDS include questions about their safety, their potential role in the initiation of tobacco use, and their potential role in the cessation of tobacco use.

Research on the short-term health effects regarding use of ENDS, generally referred to as vaping, is limited, and long-term research has yet to be reported (Callahan-Lyon, 2014). Early findings suggest that using ENDS poses some cardiovascular risks (e.g., higher blood pressure and hardened arteries; Bhatnagar, 2016; Carnevale et al., 2016; Vlachopoulos et al. 2016).

Public health officials are concerned over whether secondhand ENDS aerosols could lead to negative health consequences (CDC, 2015a). The current research shows that ENDS used indoors could expose nonusers to nicotine and other chemicals, such as propylene glycol and vegetable glycerin. Though propylene glycol and vegetable glycerin are currently viewed as safe food additives, it is uncertain whether they cause health problems after repeated inhalation. Regarding nicotine exposure, additional research is needed to determine the effects of nicotine in secondhand aerosol (Czogala et al., 2014). Use of ENDS in areas with smokefree indoor air policies may undermine the policies’ effects by reversing social norms established against smoking. ENDS use in areas with smokefree indoor air policies may also reduce the pressure to quit that these policies place on smokers (Fairchild, Bayer, & Colgrove, 2014; World Health Organization [WHO], 2014).

Initiation of Tobacco Use

Wills, Sargent, Gibbons, Pagano, and Schweitzer (2016) provided evidence that ENDS use is a risk factor for smoking onset and could be enticing lower risk adolescents to start smoking.

Soneji et al. completed a 2017 literature review and meta-analysis of nine studies examining potential links between ENDS use and initiation of tobacco use. They excluded studies that only asked about co-occurring use and focused on studies that examined adolescents and young adults who began using ENDS before smoking or without moving on to smoking. Pooling the data from these nine studies, they found that ENDS users were 3.2 times as likely to move on to start smoking cigarettes as non-users. Current ENDS users were 4.7 times more likely to be current smokers as non-current users (who may have used ENDS in the past). They concluded that ENDS “use is a strong risk factor for” (p. 791) starting smoking among youth and young adults because (a) ENDS copy the behaviors of smoking in a way that may train users to smoke, (b) users may become addicted to nicotine even if they think they are using nicotine-free ENDS that are not actually nicotine-free, and (c) ENDS use makes smoke-like clouds of aerosol socially acceptable, leading ENDS users to have more favorable views of smoking than non-users.

Smokers Turn to ENDS as an Unproven Cessation Tool

Nationally, more smokers trying to quit turn to ENDS than nicotine replacement therapy (NRT) In fact, ENDS were the third most popular quit method behind giving cigarettes up all at once (quitting cold turkey) and gradually cutting back. This ranking held true for smokers who used any number of methods to try and quit (Carabello, Shafer, Patel, Davis, & McAfee, 2017). Some Wyoming ENDS users also turn to vaping for help quitting traditional cigarettes (WYSAC, 2018) even though the U.S. Food and Drug Administration (FDA) has not approved ENDS as a cessation aid (FDA, 2013), and studies examining the efficacy of ENDS as a cessation aid have produced varying results. Generally, the results show low cessation rates, meaning ENDS are not highly successful cessation tools (Callahan-Lyon, 2014). Some researchers report that ENDS, as used presently, are not effective cessation aids and should not be promoted as such until data support this claim (Kalkhorn & Glantz, 2016). However, Abassi (2016) supports the use of ENDS as a cessation tool, after FDA-approved cessation aids have not worked. There is also significant product variability and a lack of consistent testing of products, both leading to varied findings (Callahan-Lyon, 2014).

Currently, the research is insufficient to draw firm conclusions regarding ENDS. Specifically, little research exists regarding the short- and long-term health consequences of ENDS. When research does exist, claims of inaccurate reporting, the absence of experimental studies, or inconsistent product testing can lead to incorrect or inadequate evidence (Abassi, 2016). The lack of consistent and adequate data suggests a need for further research to inform the public and decision-makers regarding risks, policy, regulations, and laws. As this research develops, in parallel with regulations on their use, it is important to monitor ENDS use among youth and adults.

Two key laws in Wyoming address ENDS. Both are focused on children and youth. Senate File 103 was a bill introduced to the Wyoming Legislature on January 10, 2013, (and signed into law later that spring) to add “electronic cigarettes” to the definition of “tobacco products” in legislation designed to prevent the sale of tobacco products to minors (State of Wyoming, 2013; 2017). The bill defines electronic cigarettes as “a product that employs any mechanical heating element, battery or electronic circuit, regardless of shape or size, that can be used to deliver doses of nicotine vapor by means of heating a liquid nicotine solution contained in a cartridge or other delivery system” (State of Wyoming, 2013, p. 2).

House Bill 174 was introduced to the Wyoming Legislature on March 10, 2015, (and signed into law later that spring) requiring that “liquid nicotine products” be sold in child-resistant packaging to prevent accidental poisonings (State of Wyoming, 2015, p.1).

As of May 2016, the FDA considers ENDS to be tobacco products (FDA, 2016). Their regulations prohibiting the sale of ENDS to minors went into effect on August 8, 2016. FDA applies these regulations to any ENDS, regardless of the nicotine content.

Youth Use of ENDS 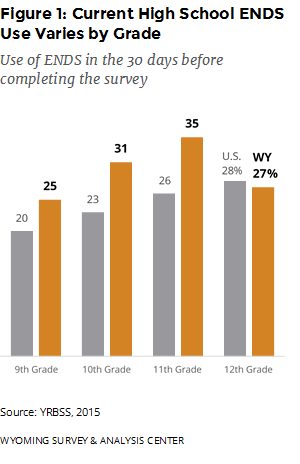 Youth use of ENDS is concerning because some research shows youth who have ever used ENDS are more likely to transition to use of combustible tobacco (Leventhal et al., 2015). Overall, nearly half (49%) of Wyoming high school students had used ENDS at least once in 2015, similar to the 45% nationwide estimate. However, a greater percentage of Wyoming high school students (30%) were current ENDS users when compared to the national estimate (24%). In Wyoming, ENDS use varied by grade with a non-linear pattern. In the United States, there was a clearer pattern of current use increasing with grade level (Figure 1; YRBSS, 2015).

In the 2016 Prevention Needs Assessment (PNA), asked high school and middle school students about their ENDS use. The results of the PNA cannot be compared to the YRBS because of differences in question content and other differences in survey methods. WYSAC examined the data for 10th graders, who had relatively high ENDS use and response rates compared to other grades (which allows for deeper analyses). In general, WYSAC found that the teens were at risk for ENDS tended to also be at risk for other undesirable behaviors and outcomes, much like with other substances like cigarettes and alcohol. Specifically, smoking and ENDS use tended to go together, as in other research cited earlier in this issue brief. Having friends who smoke and not thinking smoking is wrong are risk factors that appear related to vaping. Overall, students who had used ENDS in the past month were less likely to think it was wrong to smoke cigarettes and more likely to have close friends who smoked, compared to students who had not used ENDS in the past month. However, statistical approaches that accounted for smoking did not indicate that vaping alone was associated with thinking smoking would help them look cool or with expectations that they would smoke as adults. Therefore, the results from this survey provide limited support for some of the concerns about ENDS use putting teens at risk for smoking cigarettes.

Adult Use of ENDS

Centers for Disease Control and Prevention. (2015a). E-cigarette information. Retrieved October 24, 2016, from https://www.cdc.gov/tobacco/stateandcommunity/pdfs/cdc-osh-information-on-e-cigarettes-november-2015.pdf