The Impact of Tobacco in Wyoming: 2016 Annual Summary provides data on the prevalence of tobacco use and data associated with the four goals of the Wyoming Tobacco Prevention and Control Program:

This Annual Summary also includes a discussion about the health and economic burdens of tobacco use in Wyoming. In reporting the data, the Wyoming Survey & Analysis Center (WYSAC) at the University of Wyoming uses the data sources’ conventions for ascertaining statistical significance and for reporting confidence intervals. Using those criteria (generally an alpha of .05 for statistical tests or 95% confidence intervals), WYSAC identifies as significant only differences or relationships that have been identified by the data sources as statistically significant or where confidence intervals do not overlap. The references list at the end includes information for materials cited in this document. 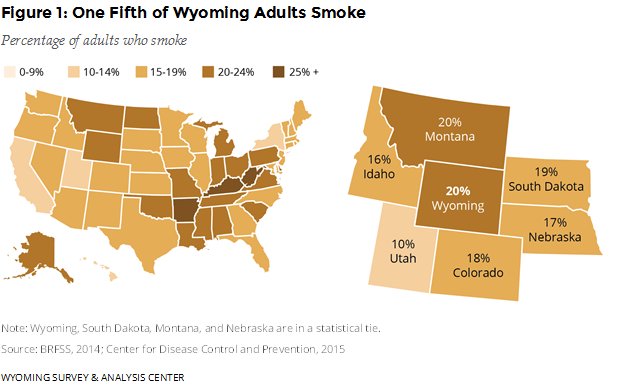 Current smokers are those who reported smoking at least 100 cigarettes in their lifetime and currently smoke every day or some days. According to the 2014 Behavioral Risk Factor Surveillance System (BRFSS), 20% of Wyoming adults smoke, slightly higher than the national median of 18%. Wyoming, South Dakota, Montana, and Nebraska are in a statistical tie for the highest smoking rate in the region defined by Wyoming and the six bordering states (Figure 1). The smoking rate in Wyoming has declined since 2011, when the smoking rate was 23%.

Electronic nicotine delivery systems (ENDS; also known as e-cigarettes, e-cigs, or vape-pens) are battery powered devices that produce a vapor by heating a liquid instead of producing smoke from burning tobacco. Contents of the liquid vary across products, and some models allow for customized liquids. Many ENDS liquids contain nicotine. In 2014, 20% of all Wyoming adults had tried ENDS at least once (WYSAC, 2014), compared to 13% nationally (Delnevo et al., 2016). Overall, 7% of Wyoming adults used ENDS daily or some days (WYSAC, 2014), compared to 4% nationally (Delnevo et al., 2016). The majority (66%) of Wyoming adults who reported ever trying ENDS said they tried them out of curiosity. Other common reasons for trying ENDS included using them in places where tobacco is not allowed and to replace, cut down, or quit other tobacco products (WYSAC, 2014b). The U.S. Food and Drug Administration (FDA) has not approved any ENDS as a cessation aid (FDA, 2013).

In Wyoming and in the United States, the cigarette smoking rate among high school students has declined since 2001, based on smoking on one or more of the 30 days prior to being surveyed. In each year, the Wyoming and national smoking rates have been similar (Figure 2; Youth Risk Behavior Surveillance System [YRBSS], 2015). 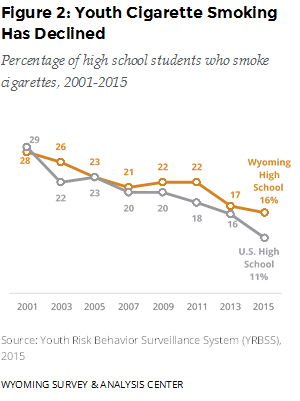 Wyoming high school students reported using cigars, cigarillos, and little cigars (13% of students) similarly to the U.S. average (10% of students) based on smoking them on at least one of the 30 days prior to being surveyed (YRBSS, 2015). 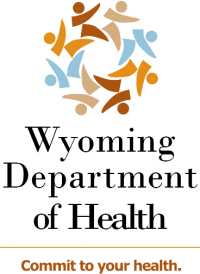