Burdens of Tobacco Use 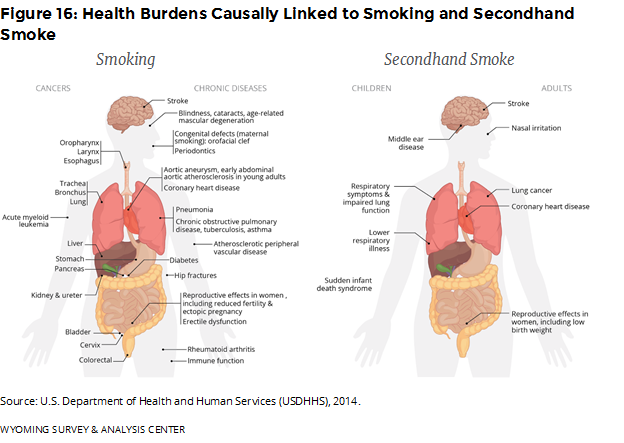 Chronic diseases are leading causes of death and sickness in the United States and Wyoming (CDC, National Center for Health Statistics, 2015). Smoking is the leading preventable cause of chronic disease and death in the United States (USDHHS, 2010). Although there is no safe level of exposure to tobacco smoke, greater exposure increases the risk for and severity of chronic disease. Cigarette smoke contains cancer-causing agents and chemicals linked to biological mechanisms that cause cardiovascular diseases, pulmonary diseases, respiratory diseases, and contribute to poor reproductive and dental health. More than 7,000 toxic chemicals comprise cigarette smoke, including ammonia, tar, and carbon monoxide. These chemicals increase the risk for developing several preventable chronic diseases for smokers and those who breathe secondhand smoke (Figure 16; USDHHS, 2014). 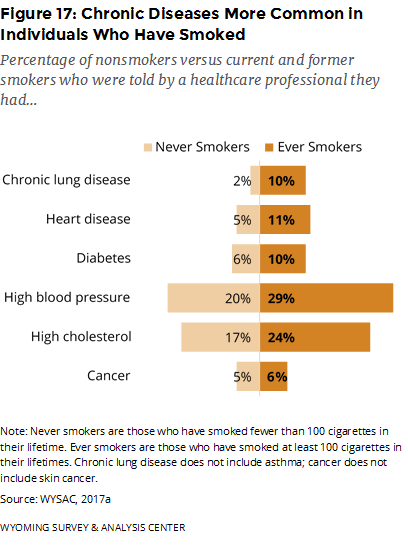 ENDS are a new tobacco-related product, so research on the contents of their liquid, aerosol, and health effects is limited. Research does show that vaping (the use of ENDS) negatively affects lung function (Cressey, 2014).

Early studies about the contents of the liquid and vapor show the presence of varying levels of nicotine as well as cancer-causing chemicals such as formaldehyde (American Lung Association, 2016). Overdoses have been reported, including among children, from drinking the nicotine liquid or spilling the liquid on their skin (CDC, 2014a). Many of the liquids also contain other chemicals for flavoring, which could be harmful when aerosolized and inhaled. 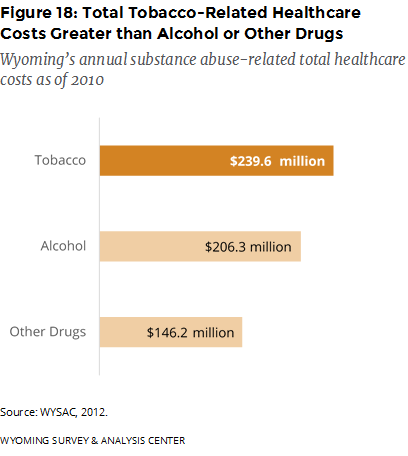 In 2010, tobacco-related healthcare cost Wyoming nearly $240 million, including private and public costs, more than alcohol and other drugs (Figure 18; WYSAC, 2012).

Smoking is associated with lost productivity nationally (USDHHS, 2015) and in Wyoming. Tobacco cost the state of Wyoming nearly $450 million in total productivity losses in 2010 (Table 7; WYSAC, 2012). 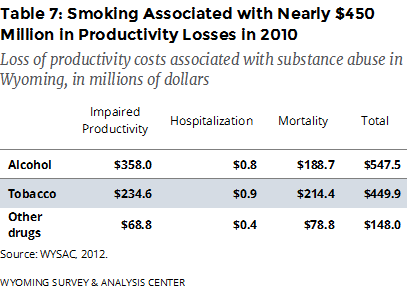 Smoking workers are generally less healthy and more costly for employers. Employing smokers is also associated with increased property loss and occupational disease (USDHHS, 2015). Berman, Crane, and Munur (2013) estimated that, on average, a U.S. smoker costs $5,816 more annually than a nonsmoker to employ. Smokers are more likely to be injured at work than nonsmokers (Craig et al. 2006; USDHHS, 2015).