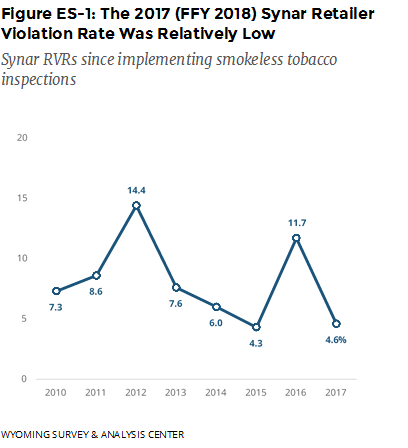 The 2017 (FFY 2018) weighted Synar tobacco retailer violation rate (RVR) was 4.6%, below the federally stipulated maximum of 20.0%. This is also a return to a low RVR after the high RVR in 2016 (FFY 2017; Figure ES-1). WYSAC met the Substance Abuse and Mental Health Administration’s (SAMHSA’s) sample size requirements and their precision requirement of a 3% or smaller margin of error (SAMHSA, 2016). WYSAC satisfied SAMHSA requirements of having a balance of inspections completed by youth of each gender and youth of each age (16 or 17). 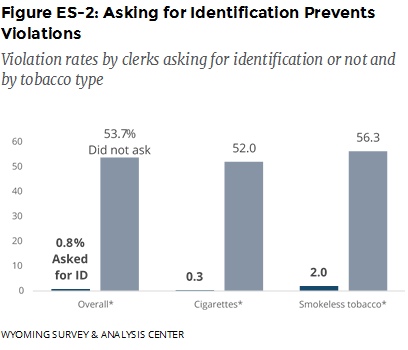 inspection and one smokeless tobacco inspection) asked for identification and then committed a violation by being willing to sell the tobacco product (Figure ES-2).

The Wyoming legislature and governor added electronic nicotine delivery systems (ENDS) to Wyoming’s legal definition of tobacco products in the state’s youth access law in 2013 (State of Wyoming, 2013; 2017). In 2015, Wyoming high school students reported greater prevalence of using ENDS than U.S. high school students (Youth Risk Behavior Surveillance System [YRBSS], 2015), and ENDS use has been linked to greater risk for using combustible tobacco products (Leventhal et al., 2015). Because of this law and these dual concerns, the Wyoming Department of Health, Public Health Division (PHD), requested a pilot study to prepare for ENDS to be included in future Synar work and/or other work related to preventing youth access to ENDS.

During the Synar inspections for cigarettes and smokeless tobacco, youth were trained to look for whether cigarettes, smokeless tobacco, and/or ENDS were accessible to customers without asking the clerk. This protocol also serves as a visual inspection for the presence of ENDS in Synar-eligible retailers. Youth noted the location of ENDS in 32.5% of the completed Synar inspections. The results of those often quick visual inspections could underestimate the availability of ENDS in Synar eligible retailers. Still, the fact that it is a low percentage provides additional evidence that these products are often unavailable in Wyoming’s Synar-eligible retailers. Continuing improvements to the Synar retailer list, specifically identifying which stores sell which products, could improve the chances of completing an inspection.