The 2016 (FFY 2017) weighted Synar tobacco retailer violation rate (RVR) was 11.7%, below the federally stipulated maximum of 20.0%. However, this violation rate was also higher than usual. The Wyoming Survey & Analysis Center at the University of Wyoming (WYSAC) was able to identify high violation rates in two of the 10 trips as key factors in the high overall RVR. For one of these trips, WYSAC was able to further isolate the high violation rate to one of the two youth. For the other trip, the two youth had similar violation rates. The protocol used for the Synar Inspection Study does not allow WYSAC to determine whether the high violation rates were because of youth characteristics (e.g., coming across as older because of a mix of appearance and confidence during the inspections), differences in driver training of the youth for those specific trips (though no driver had more than one trip with an anomalously high RVR), or geographical factors (e.g., potential differences in local law enforcement or FDA enforcement activity).

Based on these results, the action most likely to maintain or improve Wyoming’s Synar violation rate would be to educate retailers on the importance of reviewing customer identification during all tobacco sales. These efforts could be conducted with or independent of local law enforcement inspections. Additionally, ongoing FDA enforcement of regulations requiring clerks to ask for identification may have an effect on Wyoming’s Synar violation rate.

The Wyoming Legislature and Governor added electronic nicotine delivery systems (ENDS) to the legal definition of tobacco products in the state’s youth access law in 2013 (State of Wyoming, 2013, p. 2; 2016). In 2015, Wyoming high school students reported greater prevalence of using ENDS than U.S. high school students (Youth Risk Behavior Surveillance System [YRBSS], 2015), and ENDS use has been linked to greater risk for using combustible tobacco products (Leventhal et al., 2015). Because of this law and these dual concerns, the Wyoming Department of Health, Public Health Division, requested a pilot study to prepare for ENDS to be included in future Synar work and/or other work related to preventing youth access to ENDS.

The ENDS Pilot Study protocol had youth inspectors ask for the two products that are the national market leaders. Vape shops—retailers that focus on selling ENDS, often to the exclusion of selling traditional tobacco products—were not included in the ENDS Pilot Study. Inspection teams attempted 47 inspections but were only able to complete 17 inspections, generally because Synar-eligible retailers did not sell the ENDS products included in the Pilot Study protocol.

During the Synar inspections for cigarettes and smokeless tobacco, youth were trained to look for whether cigarettes, smokeless tobacco, and/or ENDS were accessible to customers without asking the clerk. Youth reported the location of ENDS in 107 out of the 232 sampled outlets (46.1%). It is likely that a greater percentage of outlets carry ENDS, but youth did not see them or report their location.

In 1992, the United States Congress enacted the Alcohol, Drug Abuse, and Mental Health Administration Reorganization Act, which includes an amendment (section 1926) aimed at decreasing youth access to tobacco. This amendment, named for its sponsor, former Representative Mike Synar (Democrat, Oklahoma), requires states to adopt and enforce state laws prohibiting the sale of tobacco to youth under the age of 18. To be in compliance, states must also conduct annual, random, and unannounced inspections to ensure compliance with the state law and develop a strategy for achieving a retailer violation rate (RVR) of less than 20.0% (Substance Abuse and Mental Health Services Administration [SAMHSA], 2010). Since 2003, the Wyoming Department of Health, Public Health Division, has contracted with the Wyoming Survey & Analysis Center (WYSAC) at the University of Wyoming to conduct Wyoming’s annual Synar Inspection Study to assess tobacco retailers’ compliance with the law.

WYSAC’s Synar evaluation complements the evaluation of Wyoming’s Tobacco Prevention and Control Program, which follows the Centers for Disease Control and Prevention (CDC) model. Specifically the CDC, Office of Smoking and Health (2014, p. 21) states, “activities to increase restrictions on tobacco product sales and availability” are key to reducing “availability of tobacco products” and “susceptibility to experimentation with tobacco products.” As highlighted in Figure 1 (following page), such activities reduce the initiation of tobacco use, the prevalence of tobacco use among young people, and the morbidity and mortality that result from tobacco use. The Synar amendment and related monitoring of compliance with state laws against selling tobacco products to minors are key parts of tobacco prevention efforts nationally and in Wyoming. 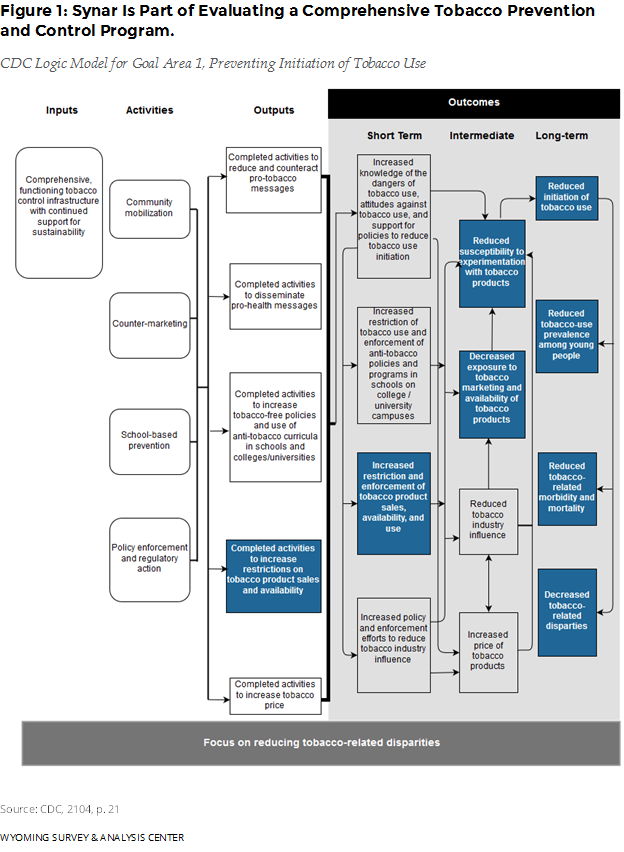 Electronic nicotine delivery systems (ENDS; also known as electronic cigarettes, e-cigarettes, e-cigs, vape-pens, and other names) are a developing public health concern in Wyoming and the nation as a new tobacco product. ENDS are battery powered devices that produce a vapor by heating a liquid instead of producing smoke from burning tobacco. Contents of the liquid vary across products, and some models allow for customized liquids. Youth use of ENDS is concerning because some research shows youth who have used ENDS are more likely to transition to use of combustible tobacco (Leventhal et al., 2015). Senate File 103 was a bill introduced to the Wyoming Legislature January 10, 2013, (and signed into law later that year) to add “electronic cigarettes” to the definition of “tobacco products” in legislation designed, in part, to prevent the sale of tobacco products to minors. The bill defines electronic cigarettes as “a product that employs any mechanical heating element, battery or electronic circuit, regardless of shape or size, that can be used to deliver doses of nicotine vapor by means of heating a liquid nicotine solution contained in a cartridge or other delivery system” (State of Wyoming, 2013, p. 2).

The YRBSS only asked about ENDS use in 2015, making a trend analysis with that data impossible. Different data show a decrease in middle and high school students’ use of tobacco products like cigarettes that coincided with a rapid increase in ENDS use. Nationally, ENDS use by high school students increased from 2% in 2011 to 16% in 2015, becoming the most commonly used tobacco product in this age group (Singh, et al., 2016).

Because of the state law and concerns described above, the Wyoming Department of Health, Public Health Division, asked WYSAC to conduct a pilot study of retailer compliance with state law prohibiting the sale of ENDS to minors with a protocol similar to the Synar Inspection Study. The results of the 2016 ENDS Pilot Study can be used to establish a realistic protocol for ENDS buy attempts and identify obstacles to incorporating ENDS buy attempts into prevention work.